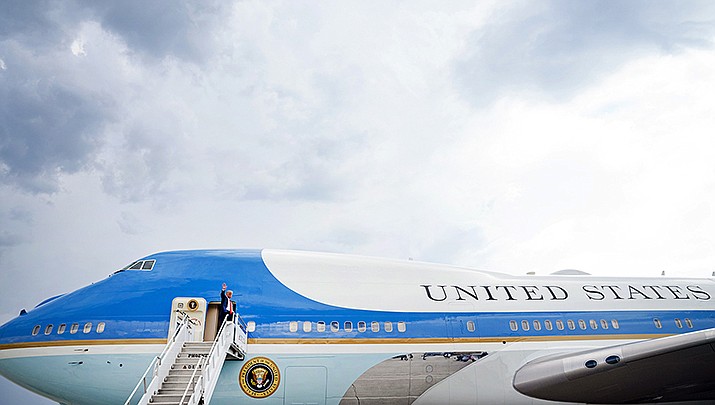 U.S. President Donald Trump boards Air Force One in Atlanta. The mayor of the city said Trump broke the law when he visited Atlanta on Wednesday, July 15 and did not wear a face mask during a coronavirus outbreak. (Official White House photo/Public domain)

ATLANTA - Georgia’s governor and the mayor of its largest city accused each other of playing politics Friday amid an escalating fight over face masks intended to reduce the spread of the coronavirus.

The battle over masks in a state with rapidly rising cases of COVID-19 erupted into a public fight in recent days as more than a dozen cities and counties defied Republican Gov. Brian Kemp and issued local orders requiring masks in their cities.

The dispute ratched up several notches Wednesday, when Kemp not only issued an executive order banning cities from requiring face coverings to prevent the spread of COVID-19 but President Donald Trump arrived in Atlanta for a visit without wearing a mask.

Bottoms held her ground, declaring that Trump violated a city order by showing up without a face covering. On Thursday, Kemp sued the city of Atlanta in order to strike down its face-mask requirement.

In an interview on CBS “This Morning,” Bottoms questioned the timing of the lawsuit, calling the litigation “really odd.”

“I pointed out that Donald Trump violated that order when he landed at our airport and did not wear a mask," she said.

She declined to say that Trump was behind Kemp's lawsuit but added that Kemp “is a Trump loyalist and he seems to work very hard to please the president of the United States, and that is often at the expense of the people in our state.”

Trump “was violating the rules of our city in just a blatant disregard for the science,” she added, noting that Georgia is home to some of the world's leading epidemiologists at the Centers for Disease Control and Prevention and Emory University.

Kemp defended the lawsuit during a press conference Friday morning, accusing Atlanta officials of playing politics and not enforcing state orders already in effect. The lawsuit was filed “on behalf of business owners, their employees and hardworking Georgians throughout the region who continue to struggle to make ends meet,” Kemp said.

“Mayor Bottoms' mask mandate cannot be enforced, but her decision to shutter businesses and undermine economic growth is devastating,” the Republican governor said.

Bottoms said she would continue enforcing the mask mandates and was prepared to toe-to-toe with Kemp.

“We will have to fight the governor about this in court," she said.