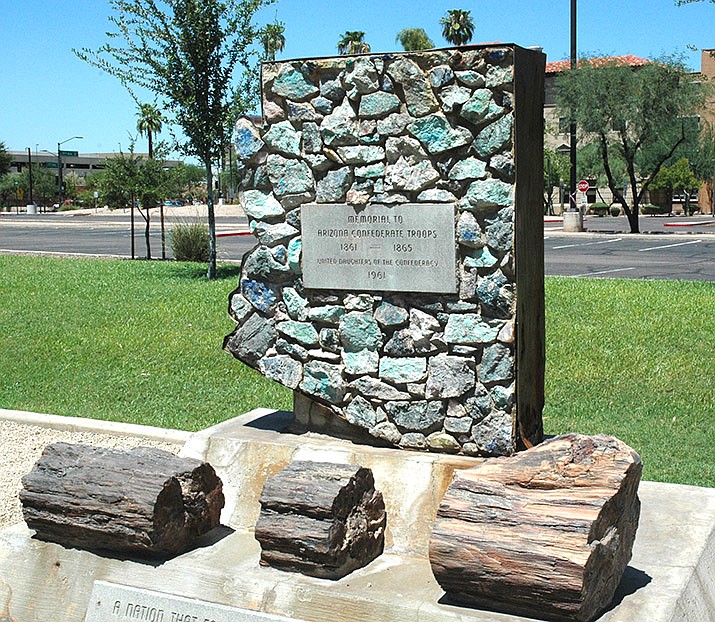 A Confederate monument near the Arizona state Capitol will be removed at the request of the organization that erected it. (File photo by Howard Fischer/For the Miner)

PHOENIX – Two Confederate monuments on Arizona state property, including one at the Capitol, will be removed at the request of the organization that erected them, Gov. Doug Ducey's administration announced Wednesday.

The monuments will be moved to private property, the latest Confederate markers to fall since George Floyd's death after he was held under the knee of a Minneapolis police officer put a renewed focus on racism in the United States.

“These monuments were gifted to the state and are now in need of repair but due to the current political climate, we believe it is unwise to repair them where they are located," leaders of the Arizona chapters of the United Daughters of the Confederacy wrote in a letter to Andy Tobin, head of the Arizona Department of Administration.

Tobin oversees Wesley Bolin Plaza, a park across from the state Capitol in Phoenix that houses a variety of monuments and memorials honoring war veterans, victims of the September 11 attacks, firefighters killed on duty and others. The Confederate monument there, erected in the 1960s, honors Arizonans who fought for the South.

Last month, the monument was vandalized with red paint.

The other monument to be removed is located on U.S. Highway 60 near Gold Canyon marking the Jefferson Davis Highway honoring the Confederate president.

Megan Rose, a spokeswoman for the Department of Administration, did not say where the monuments will end up but said they'll be moved to private property at no cost to the state.

The Phoenix city council has taken initial steps to rename a street named for Robert E. Lee, the commander of the Confederate army. A marker still stands at Picacho Peak north of Tucson dedicated to Confederate soldiers who defended the area during a skirmish touted as the westernmost battle of the Civil War.

At least 63 other Confederate statues, monuments or markers have been removed from public land across the country since Floyd’s death on May 25, making 2020 one of the busiest years yet for removals, according to an Associated Press tally. Most were removed by government officials, though protesters have toppled some.