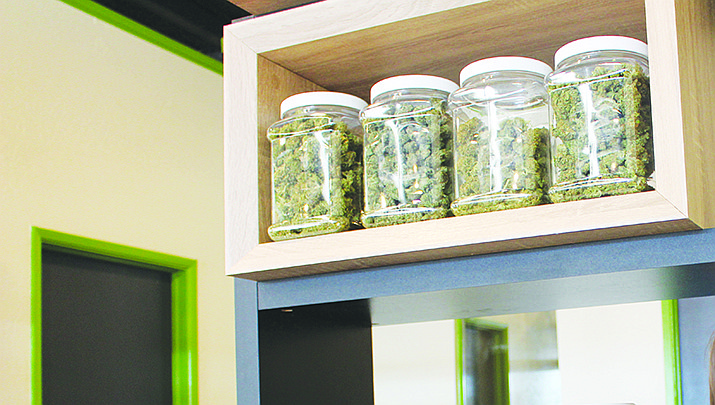 Medical marijuana is shown in a dispensary in Kingman in this 2018 file photo. Opponents of a ballot initiative to legalize recreational marijuana in Arizona are attempting to keep the measure of the November 2020 election ballot. (Miner file photo)

PHOENIX – Foes of legalizing adult recreational use of marijuana in Arizona are trying to keep the issue from going to voters in November.

Legal papers filed in Maricopa County Superior Court contend the legally required 100-word description misled people into signing the petition to put the issue on the ballot. Issues range from the definition of “marijuana” to how the law would affect driving while impaired.

The lawsuit comes as a new survey Tuesday finds widespread support fort the proposal – with more than six out of every 10 likely voters saying they will support it if it is on the ballot. Pollster Mike Noble of OH Predictive Insights said the query of 600 likely voters found that just 32 percent say they're definitely opposed.

But the question of public support could be moot if former Congressman John Shadegg, representing Arizonans for Health and Public Safety, succeeds in convincing judges that the measure is not legally fit for a public vote.

The initiative, dubbed the Smart and Safe Arizona Act, would allow adults to possess up to an ounce of marijuana or five grams of concentrate. Possession of up to 2 1/2 ounces would be considered civil offenses, only becoming a misdemeanor on a third or subsequent violation.

Current law classifies possession or sale of marijuana in any amount as a felony. The only exception is for the more than 245,000 Arizonans who have a doctor's recommendation that allows them to purchase up to 2 1/2 ounces of the drug every two weeks.

Shadegg said there are a lot of things missing from the description.

One, he said, is that it does not inform signers that they would be redefining marijuana to include not just the leaves and flowers but to extracted resin which is more potent and, under current law, legally defined as “cannabis.”

He also finds fault with the claim that the initiative, if approved, would require a showing that someone is impaired “to the slightest degree” to be convicted of driving under the influence of drugs.

The problem, Shadegg said, is that current law makes it a crime for someone to operate a motor vehicle with any amount of marijuana or cannabis, or even an active metabolite of the drug. This would add a requirement for prosecutors to also prove the person was impaired.

Shadegg also finds fault with a provision levying a 16 percent excise tax on the drug, saying it does not tell people that can never be altered except by taking the issue back to the ballot. And he said it also fails to point out that people can grow up to six marijuana plants for themselves without paying the tax.

He said that foes are trying to use the courts to make the arguments that should be made to voters. And Campbell, a former state legislator, said the 100-word description was never meant to be a point-by-point analysis of everything in the initiative.

Campbell also has a theory about why foes are trying to kill the measure in court.

“This is a desperate grasp from a group that can't afford to run a campaign,” he said. “So they're trying to do anything they can to keep it off the ballot and prevent the voters of Arizona from having their say.”

A similar measure in 2016 failed by about 4 percentage points amid an expensive campaign amid claims that adult access would lead to great teen use and more accidents. Foes spent $6.1 million at the time, with much of that coming from the Arizona Chamber of Commerce and Industry.

This year, however, the business group may find its hands full – and its resources drained – by two other high-profile measures it hopes to kill. One would impose a surcharge on incomes above $250,000 for individuals to provide more cash for K-12 schools, the other would mandate pay hikes for hospital workers.

And at this point, the chamber isn't promising anything.

"We will assess our financial commitment once we know exactly which initiatives will appear on the November ballot,” said spokesman Garrick Taylor. There are legal efforts underway to block votes on both the tax and hospital proposals.

And if those legal challenges fail?

Lisa James, heading Arizonans for Health and Public Safety, won't say what kind of budget she is counting on for this year's anti-legalization campaign.

"We expect to have the funds we need to see through a campaign that will resonate with voters,” she said. "And we expect the same result as last time.”

Nobel said that 60-plus percent base of support in the new survey runs uniformly among urban, suburban and rural voters. Even parents of children say they intend to vote for it, though backing is stronger among those without offspring.

Women support legalization more than men, with stronger backing among those in the 18-to-54 age group than those who are older. But net there is net support among seniors, too.

There is one demographic where opponents outnumber supporters.

"The Republicans are the last outpost on this,” Noble said, with 44 percent in support and 52 percent opposed. He suggested that may be why the Republican-controlled legislature opted not to take up a proposal to deal with the issue – and adopt it in a way that could be amended if there are problems – choosing instead to try to kill the issue at the ballot.

James acknowledged that similar measures have been approved in 11 other states, including California, Nevada, Colorado, Oregon and Washington. And she did not dispute that Arizonans who have traveled to those states have been able to experience the ability to walk into a storefront and walk out with marijuana in some form.

That, James said, may provide them a somewhat limited view of the issue.

James said her message will be to educate Arizonans to the problems she said have developed elsewhere, including an increase in black-market sales of the drugs in California as well as an increase in the number of people in Colorado who say they are driving under the influence of the drug.

"There's plenty to be shared with voters that they may not be aware of yet,” she said.

"There's a reason that people live in Arizona,” she said.

–"We've never been a follower state, we've always been a leader state,” James continued. "We're very independent and I think Arizonans will keep that streak of independence going.”

The survey was conducted earlier this month, with about two thirds through live callers and a third through automated responses. It is considered to have a margin of error of 4 percentage points.