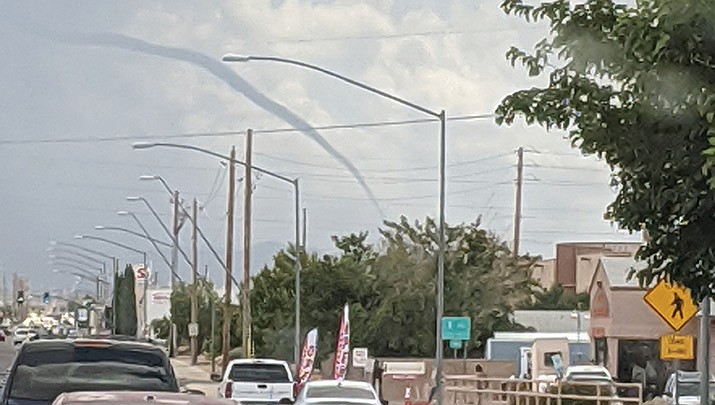 Stormy weather in the Kingman area spawned a tornado which Patrick Verville photographed from his vehicle at about 10:50 a.m. Friday, July 24. (Courtesy photo by Patrick Verville)

Kingman – A rare tornado was photographed by several observers over Kingman shortly before 11 a.m. on Friday, July 24.

The tornado was spawned by stormy weather brewing in the area. The National Weather Service has issued a flash flood warning through 4:45 p.m. today for central Mohave County, which includes Kingman.

According to NWS, Doppler radar indicated several thunderstorms that have produced heavy rain across the region, with up to 1.5 inches falling in some areas. It had not rained in Kingman as of noon on Friday.

While flash flooding is common in the Kingman area, tornado sightings are unusual. 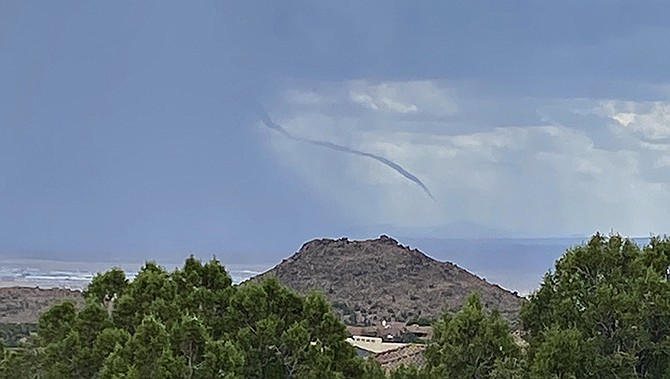 Jennie Kendrick, who lived in Las Vegas for 40 years before moving to Kingman three years ago, said she never saw a tornado until today.

“What the hell was that doing in Kingman,” Kendrick said to herself after her husband called and said she may want to duck outside with her camera.

Kendrick lives 8 miles outside of Kingman and has a good view of Route 66 and the Hualapai Mountains.

“I could hear the thunder, and all of a sudden that tornado just popped out from the Hualapai side,” she said, noting that she never saw it touch the ground.

Patrick Verville photographed the tornado from his car while he drove in Kingman. From the angle that the photo was taken it appears that the tail of the tornado, which snakes out of purplish clouds, is near the ground.