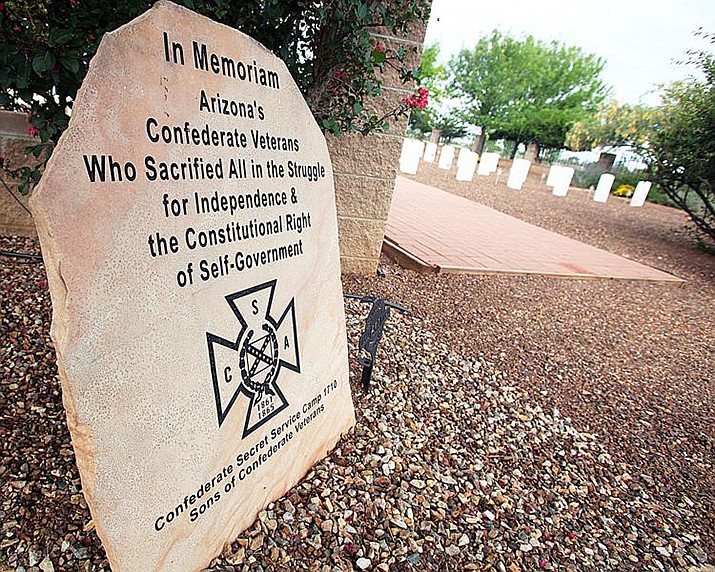 This is the remaining Confederate memorial on state property, located at the Arizona Veteran Cemetery in Sierra Vista. (Photo by Mark Levy/Sierra Vista Herald/Review) 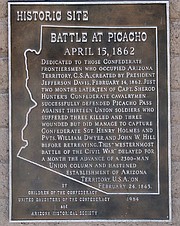 A plaque commemorating the Civil War Battle at Picacho in 1862 is shown at Picacho Peak State Park. The plaque was stolen a month ago. (Arizona State Parks and Trails photo)

And it's not because Gov. Doug Ducey did anything about it.

It turns out that a brass plaque at Picacho Peak State Park honoring Confederate soldiers who fought there, one that activists have sought to have the governor ordered removed, actually was stolen a month ago. And there are no plans to replace it.

Ducey, who has said repeatedly he doesn't want to have to decide whether Confederate monuments on state property are appropriate, escaped having to deal with two others this past week. The United Daughters of the Confederacy agreed to take back the markers they had placed in the 1960s, one across from the Capitol and one along U.S. 60 east of Apache Junction.

That leaves only the memorial at the Sierra Vista cemetery, complete with a Confederate battle flag and an inscription to honor those who fought and died for the Confederacy "in the struggle for independence and the constitutional right to self government.”

And the governor doesn't plan to do anything about it.

"I want to see a public process,” the governor said Thursday when asked about that monument.

Only thing is, there is no public process.

Ducey has never set one up since he has been asked about the issue of Confederate monuments as far back as March. Instead, he is now saying that will have to wait for the legislature to reconvene, something that won't happen until next year.

Several things make that monument particularly controversial. One is that Confederate battle flag even as officials in the South have removed it from public property and symbols. Mississippi became the last state to take it off their flag just a month ago.

And then there's the wording about "self government” amid questions about whether the South fought the war to preserve the ability to own slaves.

But Ducey, specifically asked about that slavery issue, said he was not going to force removal of that from the state-owned property.

"I'm going to stay with the policy I've had through this,” he said.

And he brushed aside questions of whether the Department of Veteran Services, headed by one of his appointees, could set up public hearings long before then.

"I don't want to kick the can down the road,” he said, saying his focus right now is COVID-19. Anyway, he said, his position has not changed.

"It's important that people know our history,” the governor said in 2017 when asked about the monuments on state land in the wake of weekend violence after a racist demonstration in Virginia. "I don't think we should try to hide our history.”

And Ducey said this past week he still has no interest in being the one to make the decision.

"I am not unilaterally going to make decisions on monuments and memorials,” he said. "There should be a public process.”

There was until recently also that plaque at Picacho. But Michelle Thompson, spokeswoman for Arizona State Parks & Trails, told Capitol Media Services it was stolen about a month ago.

Thompson said her agency notified the Arizona Historical Society which, along with the United Daughters of the Confederacy and the Sons of the Confederacy, had placed the marker in 1984 to mark the site of the only Civil War battle in Arizona.

But the plaque was not exactly a neutral description of the skirmish. Instead it was dedicated to "Confederate frontiersmen who occupied Arizona Territory, Confederate States of America” and specifically to the 10 Confederate cavalry soldiers who defended Picacho Pass against 13 Union soldier.

It also isn't going to be replaced.

Tawn Downs of the Arizona Historical Society, said her agency is no longer involved in placing such markers. More to the point, Downs said she doubts that it would be involved with another one like this.

"Times change,” she said. "We probably put on name on a few things we shouldn't have.”