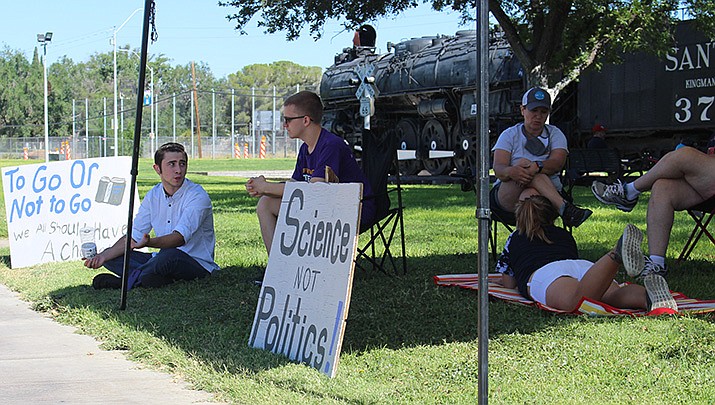 A small group gathered at Locomotive Park in Kingman on Saturday, July 25 to protest in favor of opening schools for in-school instruction. (Photo by Agata Popeda/Kingman Miner)

It attracted about 15 protesters and some friendly honking. The posters called for: “Science, not politics,” and “Open our Schools” and “To Go or Not to Go, We All Should Have a Choice.”

Malachi Ayers, 17, a Lee Williams Highs School student who organized the event, said he was hopeful that in-person classes will be held despite the coronavirus pandemic.

“The school board is meeting on Aug. 11 [Kingman Unified School District] and I really do hope they noticed this and at least are taking under consideration there is another side to this. People that are scared can still do it online,” he said.

“Keeping school closed is a bad idea because there are a lot of kids in highs school that can barely learn while they are at school,” said Seth Spurlock, 17, also a student at Lee Williams. “They are home alone with their computer.”

Malachi’s mom, Paige Ayers, came to the protest to support her son and what he is passionate about, she told The Miner

“And of course, I’m in agreement with him as well. The kids should have a choice. And it shouldn’t be a politicized issue.”

“He still did OK with grades,” he said. “But he struggled.”

Malachi is enrolled in the Cambridge Program and is taking his education seriously, along with advanced math, physics and chemistry, his father said. Now, all those classes are available in an online format only. When the schools closed, Malachi was genuinely upset.

“It wasn’t political,” Larry Ayers said. “That was his natural reaction.”

He supported his son’s protest initiative because he thought it is a good way to “make a positive statement without being angry,” Ayers said.

“School is an exciting experience that was taken away from me by the pandemic,” she said. “We need teachers because they not only teach you; they are your friends and family.”

“I’d like to see them having a choice,” said Scott Larson, a teacher at Desert Willow Elementary School, where he is responsible for the fifth grade. He came to the protest with his wife, Camille Larson, who teaches fourth grade at Desert Willow.

Suzy Roman came to the protest as a mother of a 14-year-old and someone who works in special needs pediatrics. Now, that work is on hold.

“The increase of depression and a lack of socialization,” Roman said when asked what worries her the most with the current situation. “Kids with autism cannot learn in front of a computer.”