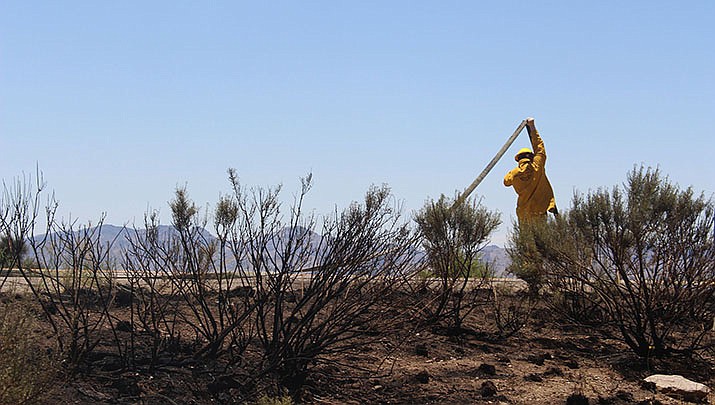 The coronavirus has changed the routine for the men and women fighting Arizona’s wildfires this year. (Miner file photo)

PHOENIX - This year’s wildfire season has been an extra challenging one for firefighters. Not only have crews had to battle some massive fires around Arizona, they have had to deal with changes in their routine due to the COVID-19 pandemic.

Pre-pandemic firefighters had their own way of life including routine morning briefings, respectful handshakes and community meals, according to the Arizona Republic.

But now, every meal is pre-packaged and firefighters have to eat 6 to 10 feet apart, crew members wave at each other instead of shaking hands and they attend virtual briefs on their smart phones or radios instead of massive and crowded in-person ones.

On top of that, Arizona has had a tough wildfire season due to a wet winter and dry summer conditions which fed massive fires across the state.

“This is the biggest impact that I’ve seen to the wildland firefighting,” Quentin Johnson, who has worked 30 years for the U.S. Forest Service, told the Republic.

Efforts to mitigate COVID-19 cases among firefighters have been successful so far, according to fire officials.

Arizona State Forestry spokesperson Tiffany Davila said that only one crew member tested positive for COVID-19 in May and has since quarantined and recovered.

The moment a firefighter gets symptoms for COVID-19, they are isolated from crews and tested.

Before the pandemic, firefighters had gatherings of hundreds of people for daily briefings where they discuss an operations plan, a weather forecast, fire behavior analysis and a safety message.

Now the briefing is recorded and broadcast on the internet, and firefighters get the link on their phone or device to watch it alone.

Firefighters are getting their temperatures taken every day before they get on the line.

“I can’t even describe how drastically different the environment is, as far as camp and how we do things,” said Steve Best, a 33-year firefighting veteran who recently worked on a wildfire near Tucson that charred nearly 120,000 acres before it was fully contained.