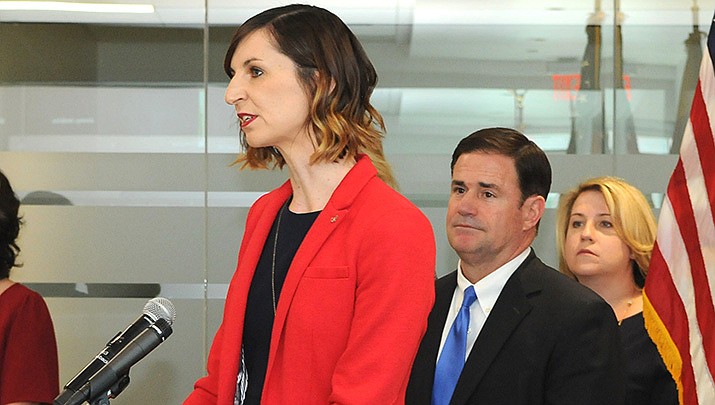 Arizona public schools chief Kathy Hoffman is shown at a press conference earlier this year with Gov. Doug Ducey. WalletHub has determined that Arizona has the third-worst school system in the nation. (Capitol Media Services file photo by Howard Fischer)

An analysis of various factors considered by the financial advice website released Monday puts only Louisiana and New Mexico further down on the list. And no state has a higher ratio of pupils to teachers.

Arizona is not at or near the bottom on everything.

But all that was outweighed – at least by the way WalletHub rates the numbers – by Arizona being at or near the bottom on other factors, like graduation rates.

The study does not factor in classroom spending and how it relates to the scores.

Several studies, however, have put Arizona at or near the bottom when it comes to how much the state is spending on a per-pupil basis. That includes Education Week whose most recent figures put Arizona second from the bottom; only Utah spends less on public education.

And it also comes as voters are being asked to increase taxes on earnings above $250,000 a year for individuals and $500,000 on couples, a move that would raise an additional $940 million a year for K-12 education.

Patrick Ptak, press aide to Gov. Doug Ducey, said none of this considers how far Arizona has come.

"Arizona schools are making significant improvement,” he said. "If you look at testing scores over the last few years and even over the last 20 years, Arizona's improvements are some of the best in the country.”

In 2015, for example, the same survey found that fourth and eighth graders were scoring 36 out of 50 states plus the District of Columbia in the National Association of Education Progress math tests. Arizona currently is at 31.

Ditto with the NAEP reading tests where Arizona went from 46th in the nation to 39 now.

But that still wasn't enough to get Arizona out of its position of third worst.

By contrast, state schools chief Kathy Hoffman looks at the WalletHub report as an indication of how far the state has to go.

"Arizona has significant room for improvement,” she said in a prepared statement. And she said that's a condition that predates the COVID-19 pandemic and its impact on schools.

"The pandemic has only exacerbated these problems for school communities across the state,” Hoffman said. "The Arizona Department of Education will continue to advocate for more equitable school funding to ensure that every student and teacher has the resources they need to succeed.”

And press aide Morgan Dick said that by "equitable,” her boss means not just divided more fairly but having more to divide up.

There has been an increase in state dollars since Ducey became governor in 2015. That includes an average 20% pay hike for teachers.

But much of the new dollars are in areas like "district additional assistance,” a fund that schools use for things like textbooks, computers and buses. All that has happened is the state restored funding levels to where they were before the last recession when dollars were cut, including by Ducey, to balance the state budget.

The result according to legislative budget analysts, is that on an inflation-adjusted basis state aid on a per-student basis is less now than it was in the 2007-2008 school year.

Funding does have an impact.

WalletHub says that the average classroom of all types has 23.5 students for each teacher. Arizona edged out California, reversing the situation as it was in 2015 when the Golden State held down the bottom of the list.

And Arizona also has a lower share of licensed and certified K-12 teachers in public schools than almost anywhere else.

The study also figures 21.3% of students won't make it through graduation, putting Arizona at No. 47 nationally and tying the state with Oregon. Alaska, New Mexico and the District of Columbia did worse.

And the report is not optimistic. Using projections from the Western Interstate Commission for Higher Education, WalletHub figures that the graduation rate between now and the 2031-2032 school year actually will decline by nearly 9.7%.

There are some areas where WalletHub rates Arizona education better than the national average.

For example, Arizona is No. 17 among states where parents believe it is safe to send their children to school, a metric that was determined before the COVID-19 outbreak. Arizona also was among the states with the fewest students going to high school while armed and below average in school shootings.

Ptak said one thing not mentioned in the report is how well Arizona schools are doing financially right now, in the middle of the pandemic, at least compared with other states. Put simply, he said, there have been no virus-related cuts to K-12 education.

By contrast, Ptak said Colorado is cutting public school funding by $621 million. And he said Ohio and Oklahoma both are making significant cuts.

"We haven't had to do that by being responsible with our budget and not spending more than is sustainable,” he said. And Ptak pointed out that Ducey is using some of his federal pandemic relief funds for K-12, including a $370 million announced just last week to help schools deal with the additional costs of having to teach during the outbreak.

The WalletHub report acknowledges that dollars don't necessarily translate into better schools. For example, Alaska and the District of Columbia are among the top spending states. But both rank in the bottom 10 of quality. Conversely, Utah spends even less per student than Arizona but still comes out at No. 18.