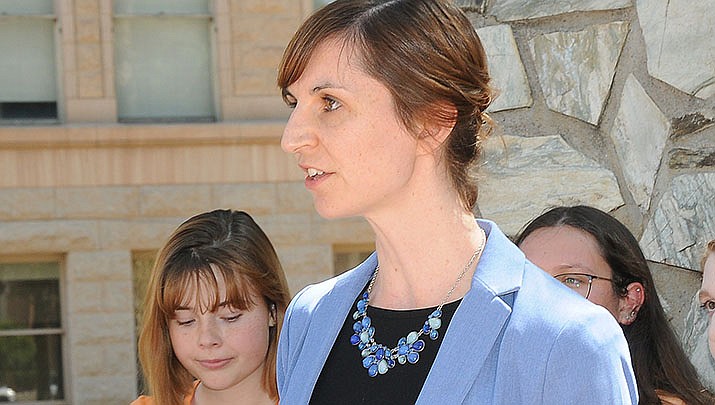 A lawsuit is underway in an attempt to prevent an initiative from appearing on the November ballot that would tax the incomes of the richest Arizonans to support public schools and give teachers raises. State schools chief Kathy Hoffman is shown above. (File photo by Howard Fischer/For the Miner)

GLENDALE - A trial began Tuesday that will help determine if a voter initiative raising taxes on the wealthy in Arizona to help boost education funding makes the November ballot.

Opponents of the Invest in Education Act allege that backers illegally paid petition circulators and that the initiative summary attached to petition sheets failed to clearly state the full size and scope of the tax increase.

The proposed initiative backed by many educators and the state teachers union would impose a 3.5% tax surcharge on income above $250,000 for an individual or above $500,000 for couples. It aims to raise about $940 million a year for schools.

A group backed by the Arizona Chamber of Commerce and Industry filed the lawsuit in Maricopa County. Superior Court. It alleges the initiative backers misled the nearly 436,000 voters who signed petitions to qualify the measure for the ballot and that petition circulators were paid per signature.

Judge Christopher Coury is overseeing three days of testimony that began with a petition circulator denying he was paid per-signature, a key point opponents contend would violate a 2017 state law. A top official with the measure's main petition company followed.

Under questioning from an attorney for the initiative challengers, Tom Bilsten, a top manager for Petition Partners, denied that signature collection alone determined how much a circulator was paid. He said a variety of factors went into deciding whether to boost a collector's pay, including productivity.

“If you were eligible, heck yeah we would love to give you a promotion,” Bilsten said. But “there was nothing that they were entitled to or there was a guarantee.”

Attorneys for the initiative backers wrote in court papers that nothing in the 2017 law prevents a petition company from boosting pay based on production.

Testimony about the 100-word summary that petition signers saw is expected later in the trial.

Half of the new tax that would be levied if voters approve the measure would be devoted to raises for credentialed teachers.

The trial on the Invest in Education Act is expected to conclude Thursday, and Coury would issue a written ruling later. Whoever loses in Coury's court is expected to appeal to the state Supreme Court.

The secretary of state is reviewing the petition sheets for all four initiatives and will send a sample to county recorders for verification before certifying that they have enough to make the ballot.