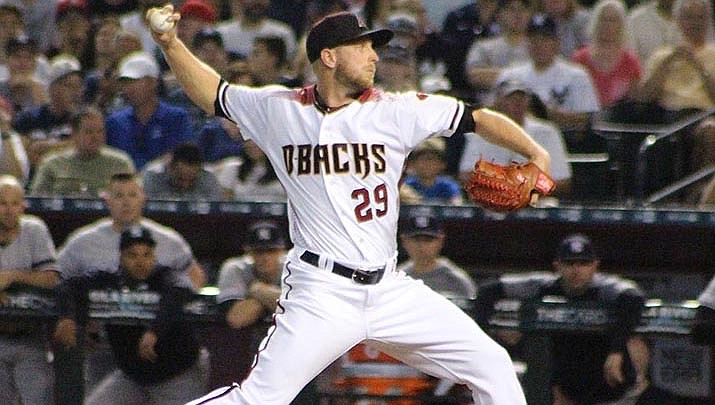 Arizona starting pitcher Merrill Kelly lost his no-hit bid in the seventh inning, but the Diamondbacks held on to beat the Texas Rangers 4-1 on Tuesday, July 28 at Arlington, Texas. (Photo by Barry Stahl, cc-by-sa-2.0, https://bit.ly/2EnCo6e)

ARLINGTON, Texas - Merrill Kelly took a no-hitter into the seventh inning before giving up a home run as the Arizona Diamondbacks beat the Texas Rangers 4-1 on Tuesday night.

Rougned Odor's one-out homer in the seventh was the first of three hits off Kelly (1-0), who struck out seven and walked one in 7 2/3 innings. The right-hander threw 71 of 104 pitches for strikes, departing after Texas got two singles in the eighth.

“I think we’re all aware of it. I think if anybody said they had no idea, I think they’d be lying,” Kelly said of his no-hit bid. “I just tried my best not to really think about it. I knew nobody had gotten a hit, but I just tried to execute pitches.”

Kelly said he threw a decent pitch that he left a little more over the plate than he wanted, and Odor put a good swing on it. The pitcher then just moved on to the next batter.

“I wasn’t really putting too much stock into it,” Kelly said. “I just wanted to get the ball back."

The 31-year-old Houston native, in his second year with the Diamondbacks after four seasons in the Korean Baseball Organization, faced Texas for the first time. The game came on the anniversary of Kenny Rogers’ perfect game at home for the Rangers in 1994, in the first season of their old ballpark.

“After a tough series in San Diego, I thought Merrill Kelly did exactly what we needed, and he basically carried us on his back the entire game,” said Diamondbacks manager Torey Lovullo, whose team lost three of four in its opening series.

After winning the season opener in their new $1.2 billion stadium with a retractable roof, the Rangers have lost three in a row. They are last in the majors with a .156 team batting average and only six runs.

“Obviously, it is frustrating. When you’re not hitting offensively, the energy looks down. Everything doesn’t look good when you’re not hitting,” Rangers manager Chris Woodward said. “I’ll give (Kelly) credit. ... Nobody had really faced him, I don’t know if that really had anything to do with it. It was definitely frustrating, but he threw a good game for sure.”

Archie Bradley worked a perfect ninth for his first save.

The Diamondbacks led 3-0 before Kelly even threw his first pitch, getting three unearned runs off Kyle Gibson (0-1) in his Texas debut. David Peralta had an RBI single after Arizona scored two runs on a two-out throwing error.

“For me, I’m more disappointed that I gave up that extra hit and the extra run in that situation,” Gibson said. “Errors are part of the game.”

Gibson, who had a career-high 13 wins last season for Minnesota before signing a three-year deal with Texas, struck out four and walked three in five innings. He threw 93 pitches, 33 in the first when he allowed his only runs.

Stephen Vogt’s RBI double in the sixth put Arizona up 4-0.

Arizona has only two no-hitters in team history, both on the road. Randy Johnson threw a perfect game at Atlanta in May 2004, and Edwin Jackson threw his 149-pitch no-hitter at Tampa Bay in June 2010. The Rangers haven't been held hitless since April 2007, against White Sox left-hander Mark Buehrle in Chicago.

Diamondbacks: Christian Walker, who dealt with a groin issue in camp, was at first base for the first time after being the DH for three games in the opening series.

Rangers: RHP Corey Kluber (muscle tear in right shoulder) was put on the 45-day injured list and returned to his home in the Boston area following a platelet-rich plasma injection. LHP Brett Martin (coronavirus) was activated from the IL. ... 3B Isiah Kiner-Falefa, who made the first-inning error, was back in the lineup after missing two games with left hamstring tightness.