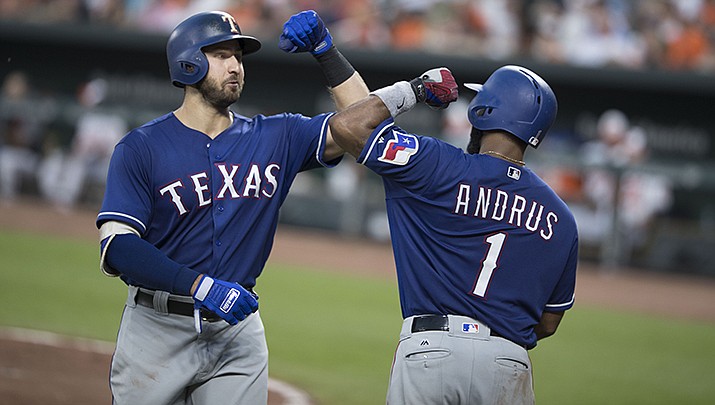 Joey Gallo of the Texas Rangers, left, smacked a two-run homer on Wednesday, July 29. It was the key blow in a five-run eighth inning as the Rangers rallied to beat Arizona 7-4. The Diamondbacks host the Los Angeles Dodgers in a four-game series this week. (Photo by Keith Allison, cc-by-sa-2.0, https://bit.ly/30ZH1eE)

ARLINGTON, Texas – Joey Gallo hit a tying, two-run homer in the eighth inning and the Texas Rangers scored three more runs after that to snap a three-game losing streak with a 7-4 win over the Arizona Diamondbacks on Wednesday.

“It’s a great sign that we offensively put something together and actually had a big inning,” Gallo said.

Gallo lined an opposite-field shot to left off Andrew Chafin (0-1) for his second homer of the season after Rougned Odor drew a leadoff walk.

The Rangers then loaded the bases with two outs before Elvis Andrus hit a two-run single and Nick Solak chipped in with an RBI single.

“There is urgency, but there is no panic,” manager Chris Woodward said. “There was a calmness about us today. ... I felt like it we could just get one good at-bat, one big hit and kind of break things open, and that's exactly what happened.”

Todd Frazier hit his first homer and had two doubles for Texas, whose five-run inning accounted for only one run fewer than it had scored combined in their first four games in the new $1.2 billion stadium with a retractable roof.

“It’s huge because you try to keep that energy and that positivity, but when things aren’t going your way it’s tough to constantly be up all the time,” Gallo said.

Jonathan Hernandez (1-0) got the win despite giving up two runs in the eighth.

Nick Goody worked a perfect ninth for his first save after regular closer Jose Leclerc experienced some shoulder tightness when warming up in the bullpen.

The Diamondbacks, held to one hit over the first six innings by Texas starter Lance Lynn, went ahead in the eighth on Eduardo Escobar’s RBI triple before he scored on David Peralta’s sacrifice fly to make it 4-2.

Arizona had runners on base in only one inning against Lynn, in the third when Jon Jay had a single between Lynn’s only two walks.

The big right-hander let out a hearty yell on way to dugout after escaping the bases-loaded jam when Escobar lined out to left.

“He’s a really good pitcher to begin with, especially as of late he seems really comfortable knowing who he is, how deceptive he is," Arizona designated hitter Christian Walker said.

He struck out eight against Arizona.

Jesse Chavez relieved Lynn to start the seventh, and gave up a walk and a double to the first two batters he faced. Carson Kelly had an RBI single and Jay had a game-tying sacrifice fly to left field.

Madison Bumgarner, in his second start for Arizona, allowed two runs on four hits over 5 1-3 innings.

The lefty, who said his normal velocity is down 2-3 mph, struck out five and walked one.

“I feel good, that’s what’s been frustrating, having my velocity down a good bit. I’ve had it fluctuate throughout my career but this is certainly a big drop right now," said Bumgarner, two starts into an $85 million, five-year deal with the Diamondbacks.

“At the same time I’ve got to go up there and pitch with what I’ve got,” Bumgarner said.

Escobar made a made a back-handed stop on Solak’s chopper that would have scored a run in the seventh.

He made a strong throw while falling toward the line, and first baseman Jake Lamb was fully extended and kept his spikes in contact with the bag just long enough for the inning-ending out that was confirmed on a replay challenge.

Diamondbacks: Escobar fouled a pitch off the outside of his left knee in the first inning.

Diamondbacks: Back to Arizona for a four-game series against the Los Angeles Dodgers.