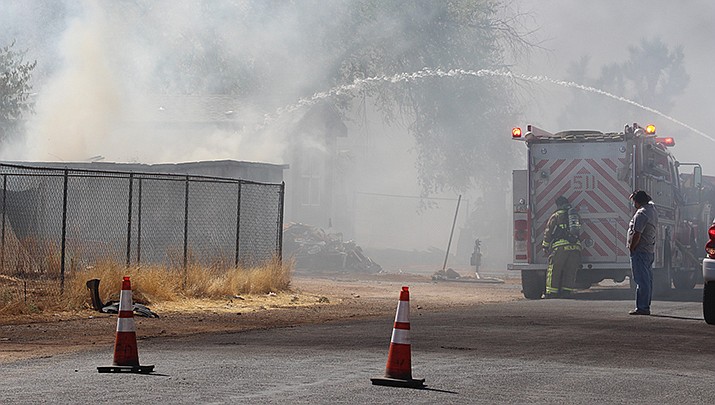 Kingman area firefighters battle a fire in the 3900 block of Northfield Avenue on Thursday, July 30. (Photo by Agata Popeda/Kingman Miner)

KINGMAN – The Northern Arizona Consolidated Fire District and Kingman Fire Department, along with two other local agencies, are battling a multi-structure fire in the 3900 block of Northfield Avenue.

KFD wrote in a news release just after 3 p.m. Thursday, July 30 that a second alarm had been struck adding units from Golden Valley Fire District and Pinion Pine Fire District.

“The heat is excruciating on personnel, additional personnel have been dispatched,” KFD wrote.

The temperature in the Kingman area as of approximately 3 p.m. was 108 degrees, and was paired with an excessive heat warning from the National Weather Service.

No injuries have been reported, and fire personnel are working to confine the fire to the origin property.