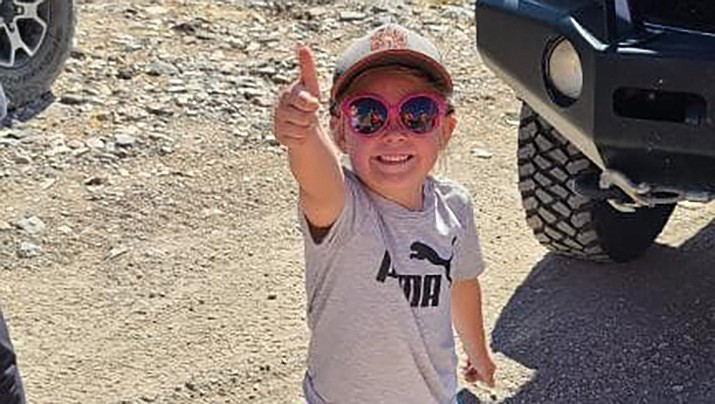 A 6-year-old girl gives the thumbs up to her rescuers after she and her party were rescued by Mohave County Sheriff’s Office Search and Rescue in the Black Mountains on Sunday, July 26. (MCSO photo)

KINGMAN – At approximately 1:30 p.m. Sunday, July 26, the Mohave County Sheriff’s Office received a call from a group of motorists who had become stranded while four-wheeling on the west side of the Black Mountains.

The stranded motorists included four females ages 45, 42, 17 and 6 along with two males ages 47 and 45. They had started from Golden Valley and made their way west to the Bullhead side of the Black Mountains when a Rubicon broke an axle and got stuck in the sand.

The occupants from the Rubicon got into an Avalanche and began to work their way out when the Avalanche broke a tie-rod. MCSO Search and Rescue was activated and a route and location search began.

Search and Rescue quickly located the group and returned them to safety. They had plenty of supplies including food and water.

“One of the group members gave our searchers a big ‘Thumbs Up’” MCSO wrote in a news release. “Great job by everyone involved.”