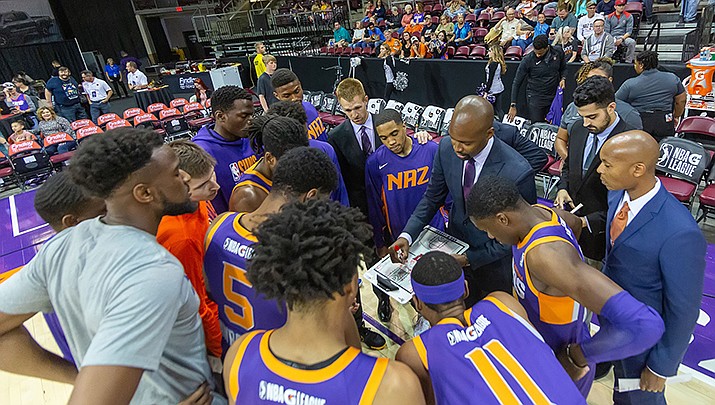 The Northern Arizona Suns NBA G League basketball team has been purchased by the Detroit Pistons and will move from Prescott Valley to Michigan next season. (NAZ Suns courtesy photo)

The Northern Arizona Suns will relocate from Prescott Valley to Phoenix for the 2020-2021 NBA G League season before being sold to the NBA’s Detroit Pistons organization, a Phoenix Suns news release confirmed Wednesday, July 29.

Phoenix Suns General Manager James Jones stated in the release that the Northern Arizona Suns will play in Phoenix at a to-be-determined venue for the upcoming campaign.

And when the season ends, the G League franchise will depart for Detroit.

The COVID-19 pandemic forced the cancellation of the 2019-2020 G League season earlier this year.

“After an extensive internal review, we determined that ownership and management of the Northern Arizona Suns does not align with the Phoenix Suns’ strategic plan for player development over the next three to five years,” the Phoenix Suns’ release added.

Jones outlined six factors that contributed to the Phoenix Suns’ decision to relocate and sell the Northern Arizona Suns, including:

– Team priorities. Jones stated that the Phoenix Suns’ priorities “drive our decision-making, which in this case is the development of the youngest roster in the NBA.”

– Roster positions. Jones stated that the Suns focus their “developmental time and efforts” on the 11th through the 15th players on their NBA roster.

– Coaching staff’s teaching experience. The Phoenix Suns’ coaching staff “operates within a shared set of guidelines [and] creates an effective learning environment and growth opportunities for our players,” Jones added.

“We will maintain our emphasis on evaluating/scouting NBA G League players for future roster consideration,” Jones added in the release.

Ironically, the Pistons already have a G League team, the Grand Rapids Drive.

However, Drive brass made it clear in a news conference in late April that the G League franchise wanted to stay in western Michigan and not move to Detroit.

The Drive will play the 2020-2021 season under Pistons ownership.

A May 1 Detroit News article reported that the Detroit Pistons will sign a 30-year lease agreement with Wayne State University, which is building a new arena in Detroit. The article added that when the Northern Arizona Suns move and are renamed, they will play 20-plus games per season at the university’s new arena.

“There is a trend in the NBA that all G League teams are within less than an hour drive of the parent club,” Pistons Vice Chairman Arn Tellem told the Detroit News in May. “There are some [G League teams] that are right in the practice facility.

“The reason is more and more G League teams are becoming a true minor-league club where players are going back and forth all the time,” Tellem continued. “In the past, and I think about Henry Ellenson [in 2017-18], [who] only played two games in Grand Rapids. That’s a crime.”