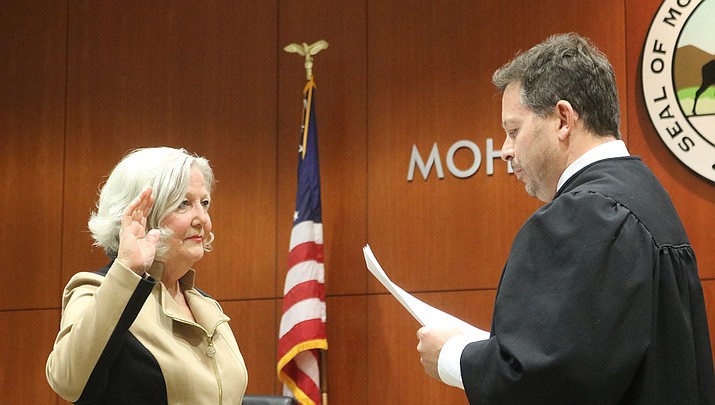 Kingman Mayor Jen Miles takes the Oath of Office in this file photo. The voters will decide on Tuesday, Aug. 4 if the terms for mayors in Kingman should be changed from two years to four years. (Miner file photo)

KINGMAN – On Tuesday, Aug. 4, Kingman voters will decide whether they want future mayors to serve four-year terms or two-year terms by casting votes for or against Proposition 417.

Proposition 417 proposes a four-year mayor term for the City of Kingman beginning with the 2022 election. Currently, Kingman mayors serve for two years. Only a handful of municipalities in Arizona have two-year mayoral rotations, according to Kingman City Manager Ron Foggin. For example, Bullhead and Lake Havasu cities both have four-year terms.

The city manager also voiced his opinion that a two-year mayoral turnover can make it difficult for a mayor to become influential in pushing for state and federal legislation that helps Kingman. Current Mayor Jen Miles, who is running unopposed this year for what could be the final two-year term for a mayor of Kingman, was supportive as well.

She said it takes time to create a network and become familiar with issues. Having an extra two years to work with would “give any future mayors more time to carry out those responsibilities more effectively,” she said.

The proposition will appear on the ballot as follows: “Proposition 417 proposes to increase the term of office for Mayor from two years to four years. If adopted this change will take effect beginning with the 2022 primary election, for the term of office starting December 2022.”