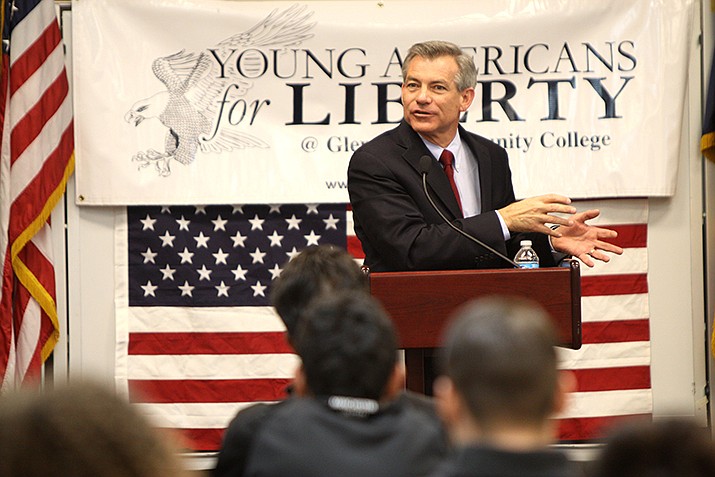 Republican Arizona Rep. David Schweikert has agreed to pay a $50,000 fine and admit to 11 violations to settle a long-running investigation by the U.S. House Ethics Committee. (Photo by Gage Skidmore, cc-by-sa-2.0, https://bit.ly/2lYeXXY)

GLENDALE – Republican Arizona Rep. David Schweikert has agreed to pay a $50,000 fine and admit to 11 violations to settle a long-running investigation by the U.S. House Ethics Committee.

The agreement with Schweikert was announced Thursday. He has been under investigation for more than two years and is seeking reelection in the Republican-leaning 6th Congressional District that covers much of north Phoenix, Scottsdale, Fountain Hills and Paradise Valley.

Four Democrats are seeking their party's nomination in next week's primary election as their party targets the longtime GOP stronghold as a possible pickup in November.

The House Ethics Committee unanimously found there was “substantial reason” to believe Schweikert violated House Rules, the government Code of Ethics and campaign finance laws. He also was accused of misusing money in his official account for unofficial purposes and pressured staff to conduct campaign work.

Schweikert agreed to pay the fine and accept an official reprimand to settle the case.

In a written response filed with the committee, Schweikert said he believed he could disprove some of the allegations but decided to seek a settlement in part because the investigative process “was time consuming and extremely costly.”

The probe initially focused on activities of Schweikert and his long-time chief of staff, Oliver Schwab, who the committee said may have misused office funds and engaged in improper campaign activities while working for the congressman. Schwab has since resigned. The investigation later expanded to other issues, including a series of campaign finance violations over the decade he's been in office, many involving misreported loans.

Schweikert referred an inquiry from The Associated Press to his political consultant, Chris Baker, who said that the campaign finance violations were mainly the result of handling his reports himself during the early part of his congressional tenure.

As to the other claims, he said that Schwab was the key culprit but he accepts that he was the one in charge.

“Schwab was his responsibility as a member,” Baker said. “He was a long-time trusted employee who frankly got off on a bad path. But David is ultimately responsible.”

The Ethics Committee viewed the matter as one of Schweikert ignoring his responsibilities.

“The misconduct ... was wide-ranging and long-spanning, and when viewed in the aggregate, a clear pattern of indifference emerges," the final report said.

It called Schweikert “indifferent” to ensuring that the offices he oversaw complied with laws and standards of conduct.

“He was indifferent to taking corrective actions after learning of reporting errors or ongoing campaign violations,” the report said.

It added that Schweikert was unresponsive to concerns raised by campaign and official staff members about Schwab’s conduct.

A spokesperson for the Democratic Congressional Campaign Committee, Sarah Guggenheimer, called the report and resulting fine “a black mark that will stay on his record” and called for him to be removed from his committee assignments.