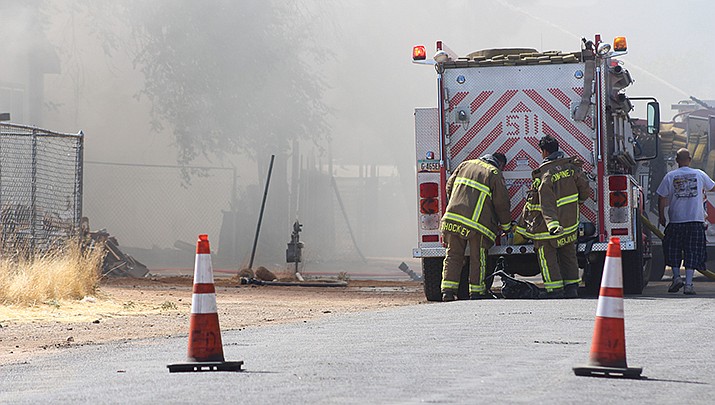 Firefighters take a break from the extreme heat while battling a three-alarm blaze that burned four structures in the 3900 block of Northfield Avenue near Kingman on Thursday, July 30. (Photo by Agata Popeda/Kingman Miner)

However, the fire quickly spread to other buildings and vehicles parked on the property. Units from Pinion Pine Fire District, Yucca Fire District and Golden Valley Fire District arrived to assist firefighters, who were working in 109-degree temperatures.

Fire personnel worked to contain the fire to the property of origin, but due to the “extremely heavy fire loads” within structures and on the property, the fire spread to adjacent properties. Command then struck a third alarm for extra manpower.

“We are normally able to handle this magnitude of fire with no problem, but throw in the extremely high temperatures, the whole scene becomes extremely dangerous for firefighters working the fire,” the release noted.

Four structures in total were lost, including three occupied residences, one storage building and 10 vehicles. Three people were displaced by the fire, and are being assisted by the American Red Cross.

No occupants or firefighters were injured during the incident.

Approximately 40 fire personnel were involved throughout the incident.

“We cannot thank the areas medical and fire agencies enough for helping as they did, it was because of this extra help no firefighters were injured, and the fire was contained to the area that it was,” NACFD stated in the release.

The cause of the fire remains under investigation.