Ducey declines to back increase in Arizona unemployment 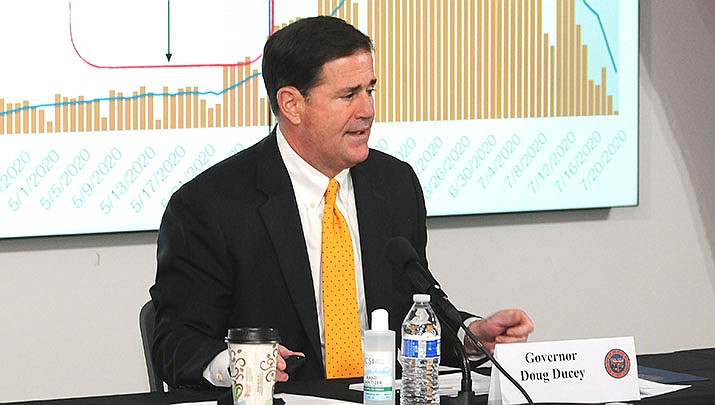 Arizona Gov. Doug Ducey on Thursday, July 30 declined to support increasing state unemployment benefits, despite their being among the lowest in the nation. (File photo by Howard Fischer/For the Miner)

PHOENIX - Arizona Gov. Doug Ducey on Thursday pushed Congress to renew federal payments for people left jobless because of the pandemic but declined to support increasing state unemployment payments that are among the lowest in the nation.

“Congress needs to act,” Ducey said. “This is on Congress.”

Arizona's unemployment payment maxes out at $240 per week, second-lowest in the nation above only Mississippi. During the coronavirus pandemic that's been supplemented by a $600 weekly payment funded by the federal government, but Congress does not appear on track to extend the funding before it lapses this week.

More than 450,000 people are receiving unemployment benefits in Arizona, up from about 17,500 before Ducey began ordering businesses to close in March to contain the spread of the virus. The $600 supplemental payments have helped many stay afloat, along with the businesses they patronize and the governments collecting taxes.

Ducey spoke at a weekly briefing on the state's response to the coronavirus. He celebrated slowing growth in coronavirus cases and easing pressure on hospitals and said people need to continue wearing masks and staying home when possible. He did not lift mandatory closures for bars and gyms or release additional information about metrics he has promised to produce to guide schools in decisions about returning to in-person instruction.

Officials reported a record 172 additional coronavirus deaths in Arizona on Thursday, though nearly half of those were the result of reviews of death certificates.

The Arizona Department of Health Services also reported another 2,525 confirmed cases across the state. In all, nearly 171,000 cases and 3,626 deaths from COVID-19 have been reported since the pandemic began.

The coronavirus causes mild or moderate symptoms, such as fever and cough, for most people. For some, especially those who are older or have underlying health conditions, it can cause more severe illness and death. The vast majority of people recover.