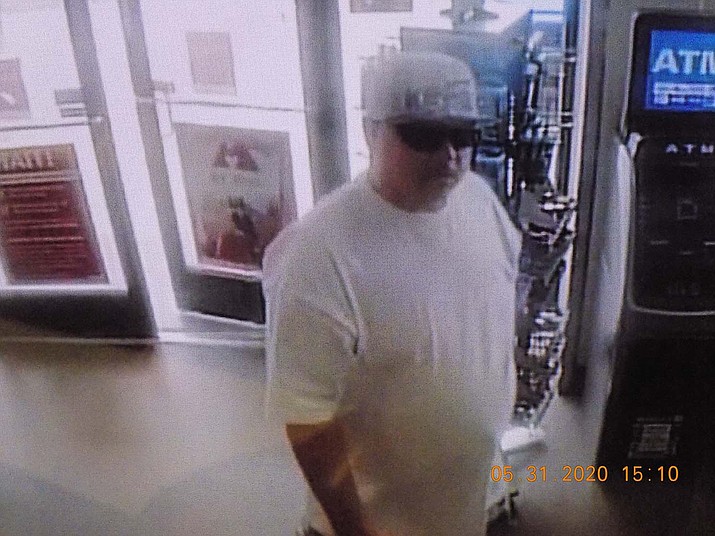 The Mohave County Sheriff’s Office is seeking information about this man, who is wanted for the aggravated assault of a convenience store clerk. (MCSO photo)

KINGMAN – The Mohave County Sheriff’s Office is seeking a male subject who allegedly punched a protective barrier at a gas station in Golden Valley which then hit the cashier, throwing her to the floor.

MCSO wrote on its Facebook page that the incident occurred Sunday, May 31 in the 5000 block of Highway 68. The male subject reportedly approached the front line at the register and was heard cursing at waiting customers. MCSO said the cashier told the man that he would have to wait his turn in line.

The subject then allegedly punched the protective barrier which then hit the cashier in the face, throwing her to the floor. The cashier sustained a laceration to her right eye and a black eye, and had her glasses damaged.

MCSO wrote that the male subject took the item he had without paying, ran to his truck and left the scene. The 2010-13 truck was a dark gray Dodge four-door with stock five-star chrome rims. The subject reportedly fled north on Adobe Road.

The male suspect is described as white or Hispanic, approximately 6 feet 2 inches tall and weighing between 250 and 260 pounds with a mustache. He was last seen wearing camouflage shorts, a white t-shirt and a hat.