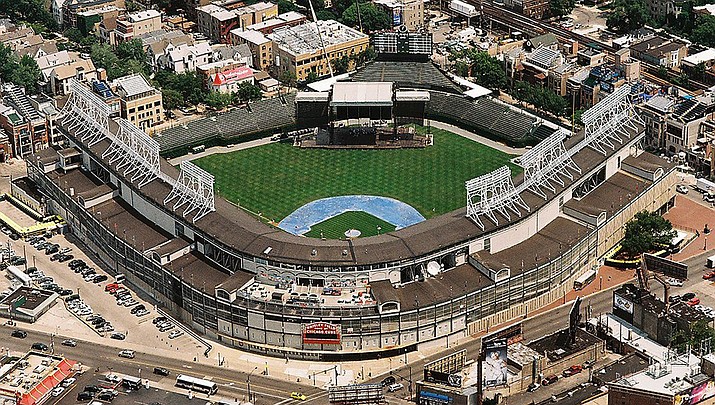 Major League Baseball has rejected a proposal by the players for a 114-game regular season schedule that would end Oct. 31. Instead the MLB is proposing a schedule of about 50 regular season games with the World Series concluding in October before a projected second wave of coronavirus. Wrigley Field in Chicago is shown. (Photo by Towpilot, cc-by-sa-3.0, https://bit.ly/2BvI2lw)

NEW YORK – Major League Baseball rejected the players' proposal for a 114-game schedule in the pandemic-delayed season with no additional salary cuts, telling the union that teams have no reason to think 82 games is possible and now will discuss even fewer.

Players made their proposal Sunday, five days after management's initial economic plan. Opening day would be June 30 and the regular season would end Oct. 31, nearly five weeks after the Sept. 27 conclusion that MLB’s proposal stuck to from the season’s original schedule.

Management has said it will discuss a schedule of about 50 games, which would result in players receiving about 30% of their full salaries under the deal for prorated pay the union agreed to in March.

“You confirmed for us on Sunday that players are unified in their view that they will not accept less than 100% of their prorated salaries, and we have no choice but to accept that representation,” Deputy Commissioner Dan Halem wrote in a letter Wednesday to chief union negotiator Bruce Meyer that was obtained by The Associated Press.

“Based on that position, the positions espoused in your counter-proposal, the significant health risk of extending the regular season past September, and the fact that we have missed our June 1 deadline for resuming spring training by June 10, we do not have any reason to believe that a negotiated solution for an 82-game season is possible,” Halem wrote.

He ended his letter by telling Meyer “we stand ready to discuss any ideas you may have that might lead to an agreement on resuming play without regular fan access in our stadiums.”

MLB does not want to play past October because it fears a second wave of the coronavirus could disrupt the postseason and jeopardize $787 million in broadcast revenue. Halem cited MLB's infectious disease consultant, Dr. Ali Khan, Dean of the College of Public Health at the University of Nebraska.

“It is not in the collective interest of clubs or players to begin a 2020 season and subsequently be forced to suspend or cancel it before the completion of the postseason,” Halem wrote.

Teams and players hope to start the season in ballparks with no fans, and teams claim they would sustain huge losses if salaries are not cut more. The sides agreed to a deal March 26 in which players accepted prorated salaries.