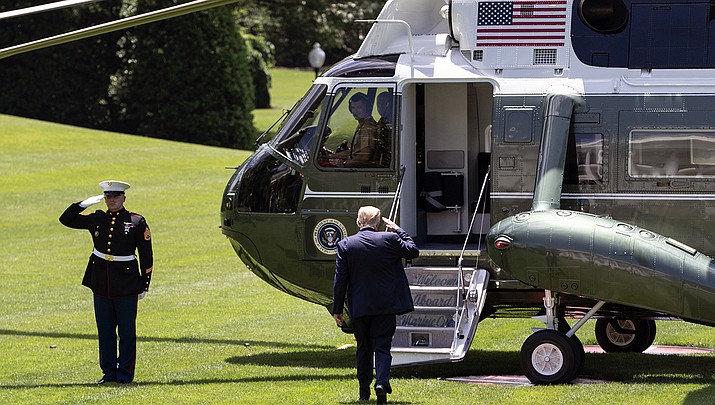 WASHINGTON - President Donald Trump effectively claimed victory over the economic crisis and COVID-19 on Friday as well as major progress against racial inequality, heartily embracing a better-than-expected jobs report in hopes of convincing a discouraged nation he deserves another four years in office.

In lengthy White House remarks amid sweeping social unrest, a still-rising virus death toll and Depression-level unemployment, the Republican president focused on what he said was improvement in all areas.

He was quick to seize the positive jobs report at a time when his political standing is at one of the weakest points of his presidency less than five months before the general election. Just 2 in 10 voters believe the country is headed in the right direction, a Monmouth University poll found earlier in the week.

The president also addressed the protests, which have calmed in recent days, that followed the death of George Floyd, the black man who died last week when a white police officer knelt for minutes on his neck.

Claiming improvements everywhere, Trump said, “Hopefully George is looking down right now and saying this is a great thing that’s happening for our country. ... This is a great, great day in terms of equality.”

Trump condemned “what happened last week,” said no other president has done as much for black Americans, and declared that an economic rebound was “the greatest thing that can happen for race relations.”

Putting words in the dead man's mouth drew quick criticism, including from likely presidential foe Joe Biden, who said it was “despicable.” The Trump campaign said any reports saying Trump was contending Floyd would be praising the economic news were "wrong, purposefully misrepresented, and maliciously crafted.”

Politically, few things matter more to Trump's future than the state of the U.S. economy, which was all but shut down by state governments this spring to prevent greater spread of the deadly coronavirus. Defying health experts, the president has aggressively encouraged states to re-open and has assailed state leaders by name who resist.

At the same time, he's taken an uneven approach to explosive racial tensions in the wake of Floyd's death. As he has in recent days, Trump on Friday offered a sympathetic message to Floyd in one breath and lashed out at protests in his name the next.

The president spoke in the Rose Garden after the Labor Department said that U.S. employers added 2.5 million workers to their payrolls last month. Economists had been expecting them instead to slash 8 million jobs in continuing fallout from the pandemic.

The jobless rate, at 13.3%, is still on par with what the nation witnessed during the Great Depression. And for the second straight month, the Labor Department acknowledged making errors in counting the unemployed during the virus outbreak, saying the real figure is worse than the numbers indicate.

Still, after weeks of dire predictions by economists that unemployment in May could hit 20% or more, the news was seen as evidence that the collapse may have bottomed out in April.

Friday’s report made for some tricky reaction gymnastics for Trump's Democratic election opponent, Biden, who sought to contrast the improving figures with the fact that millions of Americans are still out of work. The high jobless rate, he said, is due to the Trump administration mishandling the response to the pandemic.

“Let’s be clear about something: The depth of this jobs crisis is not attributable to an act of God but to a failure of a president," Biden declared in a Delaware speech shortly after Trump spoke.

The presumptive Democratic nominee said Trump was patting himself on the back as America faces some of its sternest challenges ever.

“It’s time for him to step out of his own bunker, take a look around at the consequences,” Biden said.

It’s unclear how many jobs that were lost as a result of the pandemic are permanently gone or whether the reopenings in states will create a second surge of COVID-19 deaths. In addition, the report from mid-May doesn’t reflect the effect that protests across the nation have had on business.

Many economists digging into the jobs report saw a struggle ahead after the burst of hiring last month.

Friday’s report reflected the benefits of nearly $3 trillion in government aid instead of an organic return to normal. Only one of every nine jobs lost because of the pandemic has been recovered, and the specter of corporate bankruptcies hangs over the recovery.

Much of the growth came from 2.7 million workers who were temporarily laid-off going back to their jobs. This likely reflected $510 billion in forgivable loans from the Payroll Protection Program to nearly 4.5 million employers – an administration initiative that helped push the unemployment rate down to 13.3% from 14.7% in April. African American unemployment rose slightly to 16.8%.

As the money from the PPP program runs out, there could be another round of layoffs, warned Sung Won Sohn, an economist at Loyola Marymount University.

“There will be continuing residual fear and uncertainty,” Sohn said.

Trump on Friday defended his handling of the pandemic, contending that more than 1 million Americans would have died had he not acted. More than 108,000 people are confirmed to have lost their lives due to the coronavirus, according to a count from Johns Hopkins University.

Now, though, Trump said states and cities should be lifting remaining restrictions. “I don’t know why they continue to lock down,” he said of some jurisdictions that have maintained closings.

“This shows that what we’ve been doing is right," Trump said of the jobs numbers. He added: “Today is probably the greatest comeback in American history.”

He pitched himself as key to a “rocket ship” rebound that would fail only if he doesn't win reelection.

“I’m telling you next year, unless something happens or the wrong people get in here, this will turn around,” Trump said.

US unemployment spikes to a Depression-era level of 14.7%
US unemployment drops unexpectedly to a still-high 13.3%
US consumer spending up 8.2%, partly erasing record plunge
US unemployment falls to 11% amidst new shutdowns
Powell warns that long downturn would mean severe damage
Event Calendar