Monsoon Season: 2020 Kingman monsoon conditions up in the air 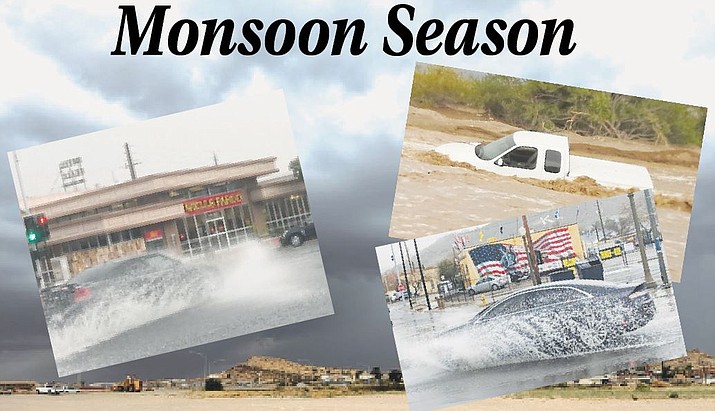 Arizona has equal chances of experiencing a 2020 monsoon season with levels of precipitation that are normal, drier than normal or wetter than normal. Regardless of how much rain falls, the National Weather Service says the state will still see flash flooding and damaging winds, and that residents should be prepared.

The season began Monday, June 15 and will last until September. Historically, according to NWS, the bulk of precipitation in Arizona occurs during July and August before diminishing in September.

For southern and eastern Arizona, the monsoon season can account for more than half of the annual rainfall.

For Kingman and Mohave County, that percentage is closer to 30%. Last year, however, conditions were on the dry side.

The 2019 monsoon season, explains NWS in an informational video provided on its website, was actually the ninth driest on record in addition to the third warmest.

“Last year, weakening El Nino conditions caused a persistent trough pattern that lasted well into the summer months and resulted in a lack of northward moisture intrusions into the state,” NWS explained.

But a neutral El Nino is giving no definitive indication of how the 2020 season will play out.

“Climate prediction center outlooks show equal chances of below normal, normal or above normal rainfall this year,” the video explains.

However, seeing as how last season was one of the driest on record, NWS said the likelihood remains “very high” that the 2020 season will be wetter than that of 2019.

Advice from the National Weather Service includes staying informed of the latest forecasts and warnings. Those taking advantage of the plethora of outdoor recreation activities available in Arizona are reminded to locate the nearest shelter to their location and to pack a safety kit in case of a weather emergency.

Those activities can also be threatened by lighting, with NWS noting that no outside location is safe when thunderstorms are in the area. “Substantial” buildings or inside enclosed, metal-topped vehicles are locations that should be sought in such conditions.

But the weather service said the biggest threat to northern Arizona during monsoon season is flash flooding. Motorists are reminded to never drive through flood waters, as even 12 inches of water can sweep a car from the road. Most flood fatalities occur in vehicles, according to NWS.

“There is plenty of fun to be had in northern Arizona from mid-June through late September, but be smart and always prepare for what hazards monsoon season can bring,” NWS wrote on its website.

For more information on monsoon season in northern Arizona, go to https://www.weather.gov/fgz/Monsoon.