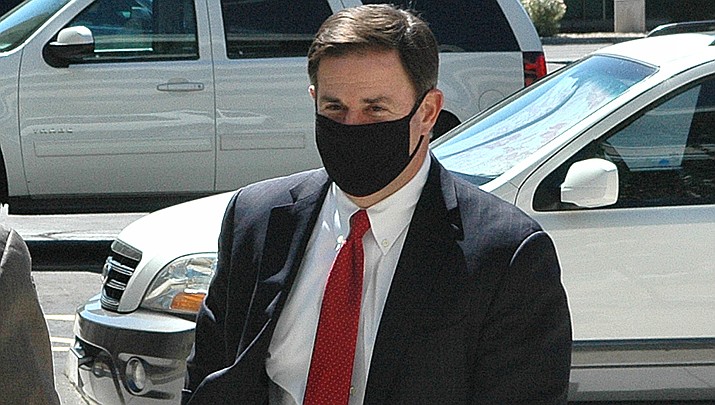 Arizona Gov. Doug Ducey is shown wearing a mask in public last week, a recent development for the governor. Ducey wore an Arizona flag mask during a visit by U.S. President Donald Trump on Tuesday, June 23. (File photo by Howard Fischer/For the Miner)

PHOENIX – Gov. Doug Ducey donned an Arizona-flag mask as he joined President Donald Trump at a rally in Phoenix on Thursday.

Ducey, a fellow Republican who last week reversed himself and let mayors require masks in public places, was one of a handful of the thousands of Trump supporters wearing one inside the Dream City Church. Several thousand people were crowded inside to hear the president speak at a “Students for Trump” event.

Fans began lining up hours before they were allowed inside, most flouting the city's order to wear masks in public to stop the spread of COVID-19. Phoenix Mayor Kate Gallego had said the policy would not be enforced, noting the city was focused on educating people not ticketing them.

Some said they felt the threat of the virus was overblown or that they were healthy enough to survive it.

“It's not anything to really concern myself about,” said Bryon McComb, who was decked out in Trump gear and said he's seen the president speak several times in Phoenix and Houston.

Inside, seats filled up shortly before Trump arrived, but late-arriving supporters were surprised to find they could get inside. Unlike many Trump events before the pandemic struck, there was large crowd gathered outside.

Pam Neff, 64, of Phoenix, brought a mask and accepted a face shield that someone handed her. She was a little concerned about the virus, but felt it was important to show her support for Trump, she said.

"I just wanted to stand for him, and I think my presence is dong that," Neff said.

Under blazing heat that reached 107 degrees in the afternoon, several hundred Trump critics gathered outside, shouting and waving signs. A group chanting “Black Lives Matter” marched down busy Cave Creek Road, escorted by police in plain clothes, and met up with others protesting in front of the entrance to the church property.

Chris Hanlon, a 49-year-old Arizona State University professor, said he was doubtful Trump would listen to the protesters' message, but he was hopeful others would listen.

“I hope that demonstrations like this convince decent, moral Americans who care about one another that they're not alone, and in fact they're in the majority,” Hanlon said.

Hanlon, who wore a mask, said he was taking a risk by joining a crowded protest, but "this is not a frivolous reason to take that risk.” He believes the protest is less risky than Trump's indoor rally in Tulsa, Oklahoma, last weekend because demonstrators were outdoors and mostly masked.

Trump arrived in Phoenix following a stop in San Luis, outside Yuma, to look at the U.S.-Mexico border wall that he's championed.

Arizona, in particular, is seeing disturbing trends in several benchmarks, including the percentage of tests that prove positive for the virus. The state’s positive test rate is at a seven-day average of 20.4%, well above the national average of 8.4%. When the positive test rate rises, it means that an outbreak is worsening – not just that more people are getting tested.

Ducey lifted his stay-home order in May but said social distancing should be maintained. He carefully avoided criticizing people who violated the recommendations and declined to order people to wear masks. But seeing worrying trends, he reversed his position last week and allowed cities and counties to impose their own mask mandates. Most, including Phoenix and Yuma – and the counties where they sit – have issued such orders.

Still, Ducey said he would not intervene to discourage Trump’s rally.

“These are voluntary events and people will voluntarily make the decision,” Ducey said at a news conference last week. “We’re going to protect people’s rights to assemble in an election year.”