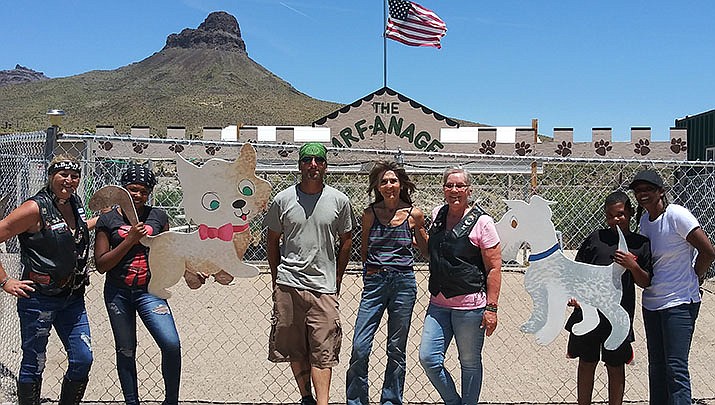 The Mohave Chapter of American Brotherhood Aimed Towards Education (ABATE) of Arizona, a motorcycle organization, commissioned artist Jeannine Clarke of Golden Valley to create large wooden caricatures of a dog and cat to be presented to For the Luv of Paws Domestic Animal Rescue and Sanctuary, 25 miles southwest of Kingman on Route 66. The caricatures will replace old ones that were weathered and chewed on by litters of rescued puppies. ABATE also donated $100 to the rescue. From left are Shirley Bizub-Kingman, ABATE state president; ABATE’s Kailanie Clarke of Golden Valley; shelter volunteer Mike Lopez of Golden Valley; Cherie DaLynn, founder of For the Luv of Paws; ABATE’s Cynde Aydt of Fort Mohave, member of ABATE; and Thomas Clarke and Jeannine Clarke of Golden Valley. (Photo by Butch Meriwether/For the Miner)