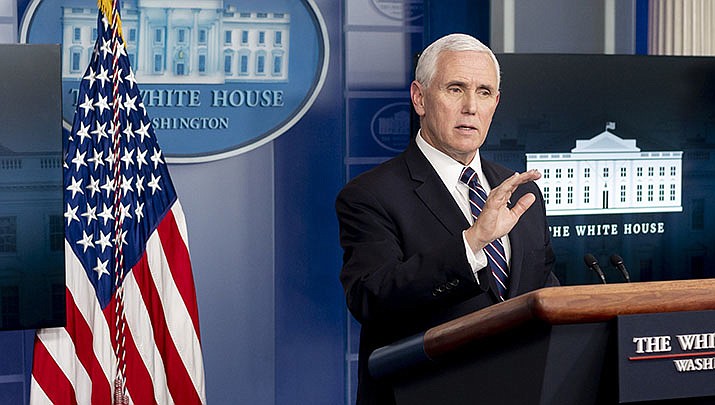 U.S. Vice President Mike Pence has canceled a campaign trip to Arizona due to a spike of coronavirus cases in the state. He also canceled a visit to Florida, which is also experiencing a surge. (Official White House photo/Public domain)

WASHINGTON – Vice President Mike Pence called off campaign events in Florida and Arizona this coming week as the states experience a surge in new coronavirus cases.

Pence will still travel to those states, which have set records for new confirmed infections in recent days, the White House confirmed last week, saying he will meet with governors and their health teams.

Pence said Friday during a briefing by the White House’s coronavirus task force that he would be visiting Florida, Texas and Arizona to receive a “ground report” on spiking cases of COVD-19 across the region.

The three states' Republican governors have come under criticism for pushing for aggressive reopening after virus-related lockdowns as cases in the states rise.

Pence is traveling to Dallas on Sunday to attend a “Celebrate Freedom Rally” at First Baptist Church Dallas before meeting with Texas Gov. Greg Abbott.

But his team said that planned political events later in the week have been pushed off.

On Tuesday, Pence was schedule to appear and address a Trump-Pence campaign “Faith in America” event in Tuscon, Arizona, before meeting Republican Gov. Doug Ducey in Yuma.

The campaign event has now been postponed.

In Florida on Thursday, Pence was to embark on a bus tour, including an appearance in Lake Wales at an event organized by the pro-Trump group America First Policies billed as the “Great American Comeback tour.”

The group announced that “out of an abundance of caution at this time, we are postponing the Great American Comeback tour stop in Florida. We look forward to rescheduling soon.”

The Sarasota County Republican Party confirmed in a note to supporters that Pence’s campaign event along the Gulf Coast of the state was also postponed.

The vice president was still set to meet with Republican Gov. Ron DeSantis.