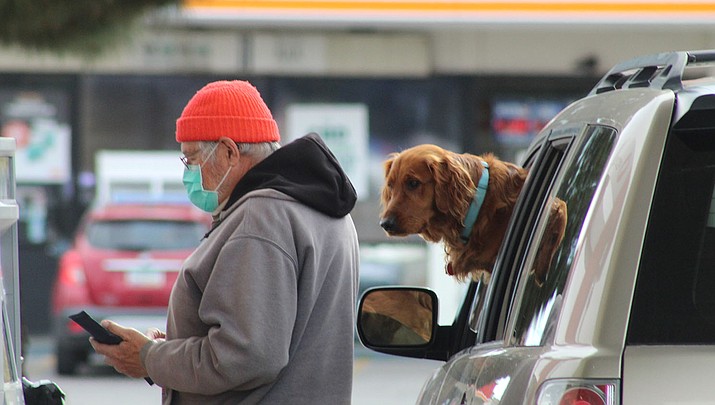 Face coverings are now required to enter places of business in Kingman. Above, a man pumps gas at the Safeway at 3125 Stockton Hill Road. Below left, a woman walks toward the grocery store. (Miner file photos)

Kingman Mayor Jen Miles has issued a proclamation requiring that all persons age 6 and older wear face coverings when entering places of business serving the public to combat COVID-19.

The proclamation goes into effect at 1 a.m. Wednesday, July 1, and will last “at least” until Aug. 1.

“I know this action will be viewed by many with disdain and anger. I know others will welcome it as long overdue. I would ask that regardless of your position, please support the civil and social contract that binds us as members of our beloved city,” the mayor said in a news release. “Let us protect each other, care for each other, and do the simple behavior that is proven to help flatten the curve – wear a mask.”

As of June 22, city employees and members of the public entering city-owned buildings were required to wear face coverings. When asked at the time in what event Kingman’s mask requirements would be expanded to include public outings, Miles said re-evaluation could occur if there is a surge in cases.

That now seems to be the case, Miles said.

“A lot of things converged at kind of the same time with the governor making decisions as he did recently regarding the closing of certain bars and other entities, as well as the really amazing surge that’s going on in this state,” the mayor said of the proclamation. “There really needs to be every action that can be taken to slow the spread and flatten this curve again.”

The mayor said the city has received a “continuous line of commentary” on both sides of the face-covering question.

“There are people that really appreciate it and believe this is overdue, and others who are really upset with it,” Miles said. “I expect that to continue. My hope is that all of us, regardless of our position, will come together and respect our social contract to take care of each other as a city and a community, and move forward to do the things that will slow the spread of the virus.”

Miles also noted that she and the mayors of Kingman’s sister cities, Bullhead and Lake Havasu, have been working closely with one another. In reference to the proclamation noting the face covering requirement will last until “at least” Aug. 1, the mayor said the matter would be re-evaluated toward the end of the month alongside Bullhead City and Lake Havasu City. Miles said such important decisions should not be made in a vacuum, and that regional implementation will help all three communities.

Then there’s the issue of enforcement. According to the news release and the mayor, Kingmanites and those passing through town won’t have to worry about fines, as enforcement will be handled through education.

“Our very first choice is to work with the public and our businesses to educate and inform to ensure they know the appropriate steps to take,” Miles said. “That is where we’re going to start. My belief, given how well the businesses have been doing with taking these precautionary efforts to heart, is that’s the right approach; to work with the businesses and our public.”

The release notes that the Kingman Police Department will work to educate the public on the proclamation, and will provide face coverings when possible.

“Upon complaint, available officers will share information with residents who are not in compliance with the order,” the release noted, reminding residents not to dial 911 for non-compliance.

Businesses whose employees cannot observe physical distancing will need to require face coverings, the release noted. And businesses will have the right to refuse service to anyone not wearing a face covering.

There are some exemptions to the wearing of face coverings. They include being at an establishment that has less than 10 people provided that Centers for Disease Control and Prevention 6-foot social distancing guidelines are observed. Those with medical or mental health conditions or developmental disabilities who have been instructed not to wear face coverings under CDC guidance are also exempt.

Those attending religious ceremonies or services are exempt as well. Restaurant patrons will not need masks while eating or drinking. However, a patron not seated at their table or other eating area will need to wear a face covering if social distancing is not possible.

Additional exemptions include swimming, and receiving dental or medical treatments. If alone in an office, vehicle or similar space, a face covering won’t be necessary. Public safety and emergency responders are also exempt in the event wearing a face covering interferes or limits their ability to work. Exemptions also extend to federal, state and Mohave County facilities.

But some have inquired as to how the city can make such a proclamation citing community safety while at the same time inviting out-of-state athletes to participate in tournaments at Centennial Park and other city venues.

“The city is doing a balancing act with trying to maintain safety while allowing people to have these sport events. The people who actually administer these events aren’t happy either because we put constraints on how many, where and when these tournaments can happen,” Miles said. “We’re going to continue to do that.”

The mayor said if businesses and their employees are taking steps to protect customers, then customers should return the favor by taking precautionary steps themselves.

“We are all in this together, and I hope that we will keep moving respectfully through this as a city, as a region and as a state,” Miles said.