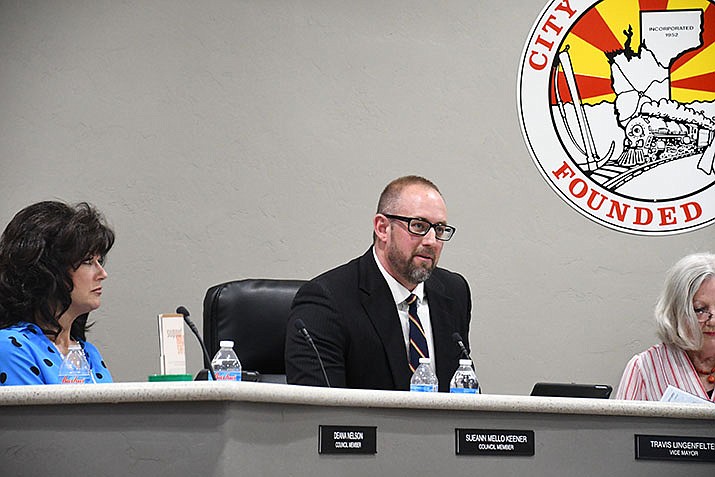 In an email to City Attorney Carl Cooper and City Manager Ron Foggin, which the vice mayor posted on his Facebook page, Lingenfelter asked that an item be added to an upcoming city council agenda regarding a comparison of state statute and Kingman Municipal Code. He said the former provides more detail than the latter in terms of how emergencies can be declared by municipalities and unincorporated areas of counties.

The vice mayor wrote in his email that he believes direction and input should come from the “full elected city council.”

“I am not against people choosing to wear face masks. Individuals and private businesses have always had the individual choice to wear and require face masks,” Lingenfelter wrote. “I am against the mandate by the government that removes our personal choice and freedom to choose. A broad mandate will harm our small business community, and I believe that the local Kingman numbers show that we are doing a good job managing COVID-19 in Kingman by continuing to do what we have been doing. (Kingman Regional Medical Center) is not over-run, and our cases are not doubling, they are falling.”

The vice mayor said that through social distancing, limiting group sizes and hand washing, Kingman has done a good job of combating the spread of the virus. When taking into account criteria for reopening provided by the Centers for Disease Control and Prevention, such as a downward trajectory in cases with testing in place along with other considerations, the vice mayor said he can’t support a face covering proclamation. He said that justification for such a proclamation would require the incorporation of COVID-19 data from outside of Kingman.

Lingenfelter told The Miner that he feels strongly about communication and dialogue occurring in an open and transparent form, “at least to hear where everybody stands on an issue prior to having a proclamation go out.”

“I absolutely know Mayor Miles’ heart and her love for our city, and I would defend that against anyone who says she does not love our city,” the vice mayor said, noting that he just respectfully disagrees with the mayor’s proclamation, again citing that the city has done well in satisfying CDC criteria. “Because of the good work of our citizens and small business community, we continue to satisfy that criteria. So it’s difficult for me to support this proclamation at this time. In order to justify a proclamation like this, you have to use data outside of Kingman.

“So I just respectfully disagree with it. I’m standing for the freedom for people to continue to choose, to continue what we’ve been doing to flatten the curve.”