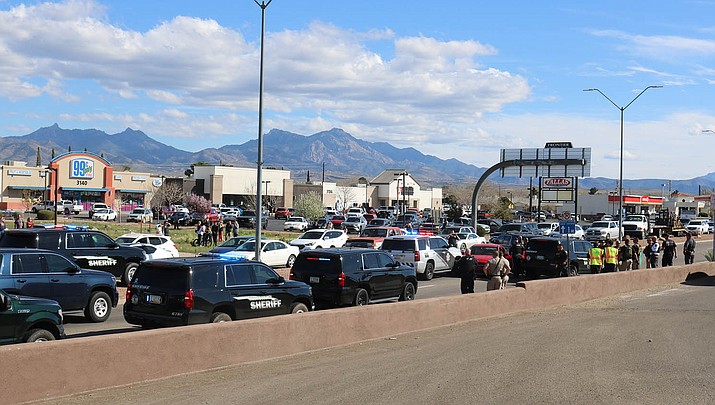 Police surround a red Mercedes sedan whose driver reportedly attempted to run over a deputy on Stockton Hill Road during a welfare check at about 3 p.m. Monday, March 9. (Photo by Travis Rains/Kingman Miner)

KINGMAN – There was a significant law enforcement presence at approximately 3 p.m. Monday, March 9 on Stockton Hill Road near the Interstate 40 off-ramp after a vehicle pursuit ended in a collision.

According to the Mohave County Sheriff’s Office, what initially came over as a check-welfare call resulted in a vehicle pursuit and a collision that appears to have involved at least two vehicles.

The driver of a red Mercedes sedan, which was reportedly involved in the incident and blocking Stockton Hill Road, allegedly attempted to “run over” a deputy, which started the pursuit.

Southbound Stockton Hill Road was closed at the off-ramp for less than an hour.

This story will be updated when additional information becomes available.