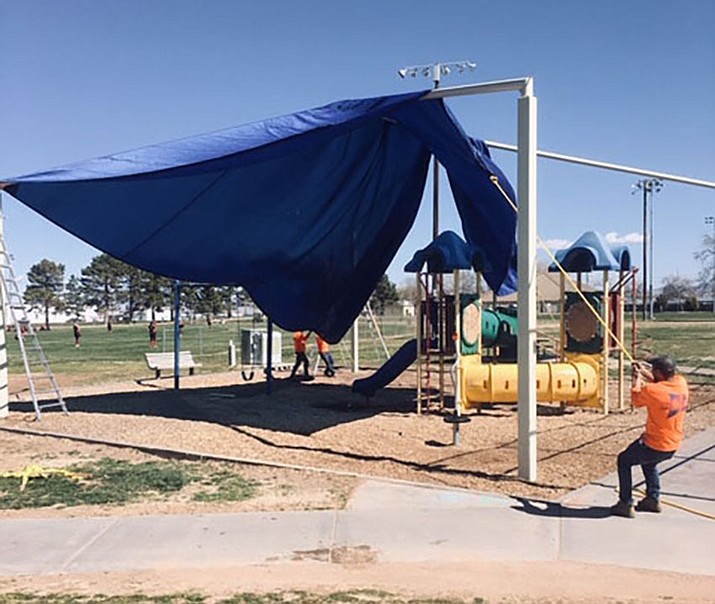 A shade structure is shown being installed at Centennial Park in Kingman. While some events and leagues have been suspended due to the coronavirus pandemic, residents are still able to use city parks. (file photo)

Concern over the coronavirus has resulted in a raft of cancellations in the city, and even a warning from city officials about flushing items other than toilet paper.

The Citizens Academy that was scheduled to begin this week, and teach participants about city government, has been postponed, according to Coleen Haines, City of Kingman public affairs coordinator.

While many Parks and Recreation Department events and leagues have been canceled for an approximate two weeks, city parks remain open. Haines said the Parks Department is working overtime to clean all surfaces at the parks, including restrooms and picnic tables.

Haines also noted that while the city encourages people to practice social distancing, the hope is that such practices won’t be a detriment to local business.

One mitigating step, Haines suggested, would be to purchase gift certificates that can be used at a later date. That way, customers can practice social distancing while at the same time patronizing Kingman businesses.

As toilet paper flies off the shelves and people resort to other methods of cleanliness, Haines reminded the public that items such as baby wipes and paper towels should not be flushed.

“Don’t flush things other than TP,” she said. “It will obviously start causing huge, huge issues if we have this inundation of people flushing non-essential things down their toilets.”

Overall, Haines said, the City of Kingman is following the state’s lead in regards to coronavirus response.

If you plan to attend a previously scheduled event in town, check to see if it will still be held. The Miner will report cancellations as they are received.