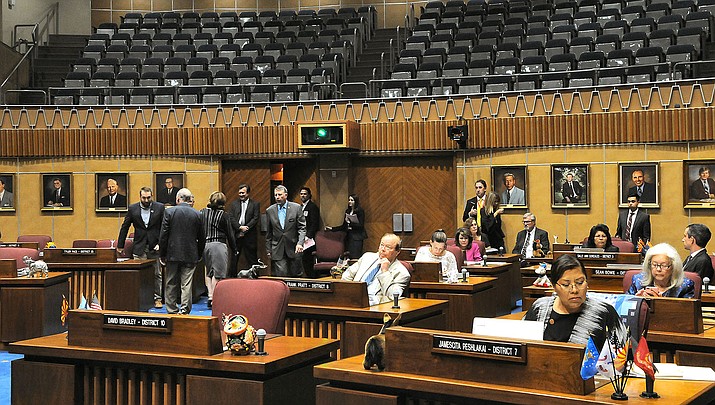 Arizona senators convened Monday, March 16 with several members absent and a gallery closed to the public as the COVID-19 virus continues to spread. Lawmakers plan to approve the budget, then recess. (Capitol Media Services photo by Howard Fischer)

PHOENIX - State lawmakers were are to come up with a plan to adopt what might be called a no-frills budget for the coming year and then go home, at least temporarily.

House Speaker Rusty Bowers, R-Mesa, said Monday the plan would ensure the continued functioning of state agencies for the new fiscal year that begins July 1 if for some reason lawmakers cannot return before then. He also said there are 26 separate and "non-controversial'' bills that would be approved in the next day or two.

"Anything that entails any floor debate or anything, we're just pushing it off,'' Bowers said.

The idea, he told colleagues would be to return, "hopefully soon.'' But he said the delay will give the situation with COVID-19 a chance to settle down.

Some of that, Bowers said, involves getting out test kits. But he also wants a better estimate of what kind of revenues the state will bring in this coming fiscal year, revenue numbers that for the moment are in flux given the effect of the virus on the economy.

And there's something else behind the decision to take a multi-day -- or multi-week -- recess: the lack of enough lawmakers to do the state's business.

"Some of us have underlying health conditions or families,'' Bowers said. And the Republicans have just a one-vote edge in the House.

That same problem exists across the courtyard in the Senate where several lawmakers already had opted to stay away, including two Republicans in what has been a 17-13 chamber.

Senate President Karen Fann, R-Prescott, said she, too, wants to adopt a basic budget this week. But unlike Bowers, she sees no reason for lawmakers to then go home.

In her case, she said, it comes down to having a spending plan in the can in case there comes a point when there are just too many lawmakers who are sick or unwilling to come to the Capitol to vote. This was, Fann said, government will continue.

But if lawmakers are available, she said there is no reason not to continue with legislative business.

Among the unanswered questions is what beyond the budget lawmakers will approve, including help for those affected. That includes eligibility for unemployment benefits.

Under current law, only those who are laid off through no fault of their own are eligible. But they also need to be actively looking for work to get payments.

That presents problems for those who are home, without pay, because an employer has shuttered due to the virus but will want employees to come back at some future point. And then there are questions about whether anyone who is sick with the virus should be out job hunting.

An aide to Gov. Doug Ducey said the administration is looking at the question.

Earlier Monday representatives of various labor unions and supporters called on the governor and lawmakers to adopt policies designed to protect those affected by the virus, whether directly or the fallout from closures and the hit to the economy.

"We don't have work for the last two weeks, and maybe for the next month,'' said Maria Valdez who has been employed in the banquet services department of the Sheraton Hotel in downtown Phoenix.

"I'm really afraid that I'm not going to be able to pay my mortgage, to pay my bills, to have food for my kids,'' she said. "We're asking for the governor to do something to help a lot of families.''

Adrian DeMoss who works on cleaning common areas around the restaurants at Sky Harbor International Airport told of staffers having work cut to 20 hours a week.

"That affects our insurance,'' he said. "As a 60 year old that really, really frightens me to not have my insurance.''

Rep. Raquel Teran said it would be irresponsible for lawmakers to leave the Capitol without acting on relief.

"We cannot leaves this space without leaving policies that are going to protect our workers,'' she said.

"This is not just about a benefit,'' Teran said. "This is about protecting our families.''

There has been other fallout for the state from the outbreak.

On Monday the American Civil Liberties Union asked a federal judge to order the Department of Corrections and state officials to make certain changes to protect inmates from the spread of the disease.

Attorneys said the problem goes beyond shortages of medical staff. They cited policies they say leave inmates at risk, ranging from charging them for hygiene supplies including soap and designating ethyl-alcohol based hand sanitizer as contraband.

"There is a real and immediate risk that class members incarcerated in Arizona prisons will die or suffer serious medical injuries due to defendants' failure to prepared for the COVID-19 pandemic,'' the lawsuit states.

There was no response from the state agency.