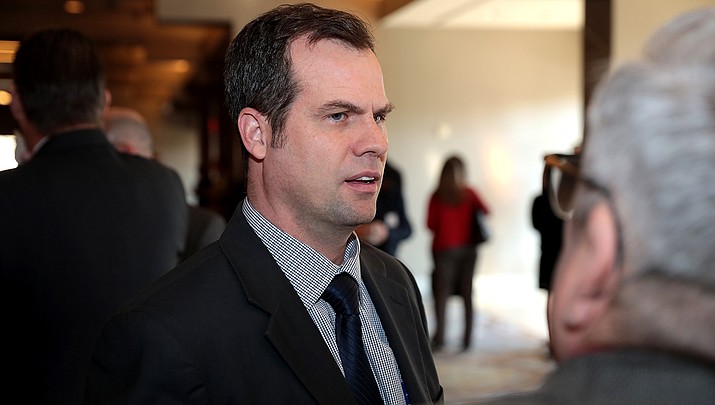 PHOENIX - Facing an increasing risk of virus spread, the Republican controlled House on Tuesday enacted a remote-voting plan for themselves that Democrats contend is designed largely to protect the GOP majority.

The proposal pushed by Majority Leader Warren Petersen, R-Gilbert, suspends rules that require that representatives actually be on the floor to cast their votes. Instead, it permits them to use technology to monitor floor action from a remote location and record their votes in real times.

Only thing is, House Speaker Rusty Bowers, R-Mesa, acknowledged the system may be able to accommodate only six lawmakers at a time - perhaps as many as eight - before it would crash. That means Bowers would have to select who would be eligible for off-site voting.

He said factors would include both the age of members as well as underlying medical conditions. Also a consideration, Bowers said, are those who have family members with compromised health conditions.

Rep. Randy Friese, D-Tucson, said there are far more than six members who fit that category. Friese said that includes him with wife, Susan, who takes immunosuppressants for a form of arthritis.

Others had their own stories, like Rep. Jennifer Jermaine, D-Chandler, who said she is a cancer survivor who has asthma and a traumatic brain injury. And Rep. Alma Hernandez, D-Tucson, said her father has been in and out of the hospital who depends on oxygen to remain alive.

"I can't go home,'' she said, for fear of spreading the disease.

The divisive vote - only one Democrat supported the change - throws a shadow over efforts to enact a bipartisan "baseline'' budget as early as this week to ensure there is authority for the state to continue operations when the new fiscal year begins on July 1 in case deteriorating health conditions preclude the Legislature from continuing to meet.

House Republicans went ahead anyway and introduced nine separate spending bills late Tuesday. But so far there is no deal with Democrats -- and no vote scheduled.

It also undermines whether lawmakers will come up with a bipartisan plan to debate and enact immediate changes are needed in state law to deal with the health crisis.

Rep. Kristen Engel, D-Tucson, said there is a better alternative than remote voting.

She pointed out that 58 of the 60 members were on the floor Tuesday, more than enough to enact a bipartisan plan to enact a basic budget as well as approve funds to deal with the health emergency caused by COVID-19 such as drive-through testing and protective gear for first responders.

At that point, lawmakers could then end or recess the session, putting off action on other bills until the health emergency passes.

But there may be things the Democrats want that may not get GOP support. These range from paid sick leave and eviction prevention to money for food banks.

Rep. Athena Salman, D-Tempe, said she thinks there's a reason Bowers and the Republicans, who barely control the 60-member House, won't pursue a plan to enact a bipartisan spending plan and then go home.

"This is a measure to ensure 31 Republican votes on anything that passes,'' she said.

It takes 31 votes for final approval of any measure. And that means if even one GOP lawmaker is absent that any measure fails unless it gets the support of at least one of the 29 Democrats.

Remote voting increases the chances that Bowers can guarantee 31 Republican votes, whether in person or online.

Rep. Bret Roberts, R-Maricopa, acknowledged there is a sentiment among Republicans to do more than simply enact a budget and virus emergency plan.

"There is a lot of legislation that's been worked on,'' he said, legislation that would self-destruct if the Legislature adjourns. For example, he said, there is bipartisan support for legislation to allow some prison inmates to be released earlier.

Rep. Mitzi Epstein, D-Tempe, said she has no problem with that -- or any other measure where there is broad support. That, in turn, would allow approval even with some members absent.

But she said this would "empower a virtual Legislature with public shut out,'' pointing out that this move comes on the heels of other changes which not only closed the House gallery to the public but empowered those who chair committees to limit or even eliminate public testimony.

And House Minority Leader Charlene Fernandez, D-Yuma, questioned the need for a rush, especially as the only constitutional obligation the Legislature has is to enact a new budget.

Rep. Jeff Weninger, R-Chandler, pointed out that, strictly speaking, nothing in the new rule limits the number of people who can vote remotely to six or even eight. He said there may be other technology out there that would allow a larger number of lawmakers to stay home and still cast their votes.

Even Bowers, however, conceded that is not currently feasible.

"The technological impediment is the platform itself,'' he said.

Rep. Diego Rodriguez, D-Phoenix, said debating the number of people who need not be present to vote misses the point.

"Our country was built on people sitting in a room, looking at each other and debating these issues,'' he said. "Simply because we have the technological capability of moving past that stage doesn't mean that we should do so.''

Rodriguez said that goes beyond actual floor debate to even informal discussions that occur in the lounge just outside the House chamber or walking down the hallway.

As it turned out, two Democrats were the first to take advantage of the remote voting plan: Rep. Amish Shah of Phoenix who is an emergency room physician and wants to avoid being anywhere he could get infected and transfer the virus to patients, and Rep. Gerae Peten of Goodyear who is 72.

Even with Tuesday's House vote - and the opportunity to ensure that all 31 Republicans get to vote - that may not clear the way for future legislative action if Democrats refuse to go along.

At the moment there are at least two Senate Republicans who are currently staying away from that chamber due to COVID-19. And that leaves Senate President Karen Fann, R-Prescott, without 16 GOP votes in her 30-member chamber.

A spokesman for Fann said there are no plans to pursue remote voting in the Senate.