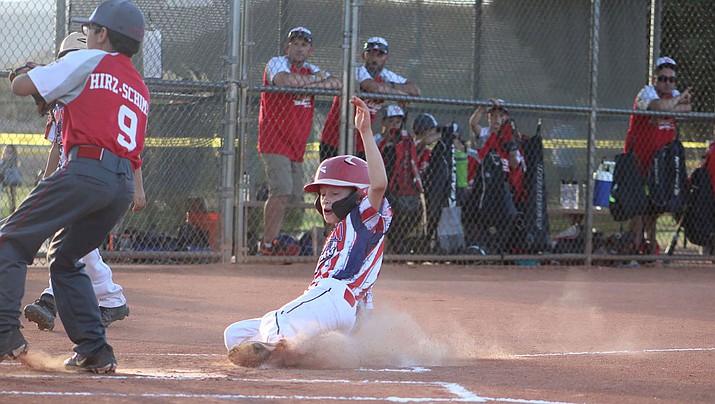 Canton Collins slides into home during Kingman North Little League’s win over Kingman last year. Collins and his teammates will have to wait until May 11 to start playing this season. (Miner file photo)

KINGMAN – Every athlete enjoys hearing the words “Play Ball” before a game, but local Little League squads will have to wait to hear that phrase. The Kingman Little League and Kingman North Little League will delay the start of the season until Monday, May 11 due to the coronavirus pandemic.

Kingman Little League is also following the same guidelines. The league posted on its Facebook page that the board met Wednesday evening and voted to follow the same protocol as other leagues across the United States.

“When we get the clear to practice, play baseball and gather together we will get our season started,” the post said. “Our season is not canceled and we have full belief we will be able to play.”

Most leagues were supposed to start March 13, but now they’ll have nearly a two-month hiatus until the first pitch. However, there is a glimmer of hope that the break could be shorter.

“If things change prior to (May 11) and they give us the OK to go, we will,” Petrauschke said. “We’re just going to wait it out and see what happens.”

The biggest issue with delaying the season is the timing of postseason tournaments that are usually played in mid-June.

“If we have to start later, the question is if we could push back the Tournament of Champions and All Stars,” Petrauschke said. “That’s all completely unknown. We’ll cross that bridge when we get there. We’re not there yet.”

Right now the focus is on what’s important – education on the virus.

“I think the older kids understand,” Petrauschke said. “The younger kids aren’t quite sure what’s going on, but they understand something’s wrong. They’re not in school and I’m sure all moms and dads have had conversations with them. But at the end of the day, pre-teen and T-ball kids don’t understand coronavirus and why they can’t play baseball.

“Hopefully parents are still playing baseball with their kids in the yard,” Petrauschke continued. “Playing catch and those types of things to kind of stay fresh just in case the league does happen.”

The coronavirus has also affected Kingman Youth Soccer as it canceled its spring Futsal season. There were talks of delaying action, but ultimately the decision was made to cancel.

“The board talked about postponing it,” said Kingman Youth Soccer President Jordan Wayman. “But with Futsal being such a short season and everyone not having access to their gyms, I’m almost positive the schools are going to take priority and say, ‘Hey we promised this to you before, but we’ve missed so many activities, we need to catch up as well.’ So that was a problem because a lot of our venues that were free and accessible at the time would no longer be accessible to us later as well.”

“We’re hoping that the rec league during the springtime and summertime is still something we do,” Wayman said. “It just all depends on what happens with the nation and what’s going on.”