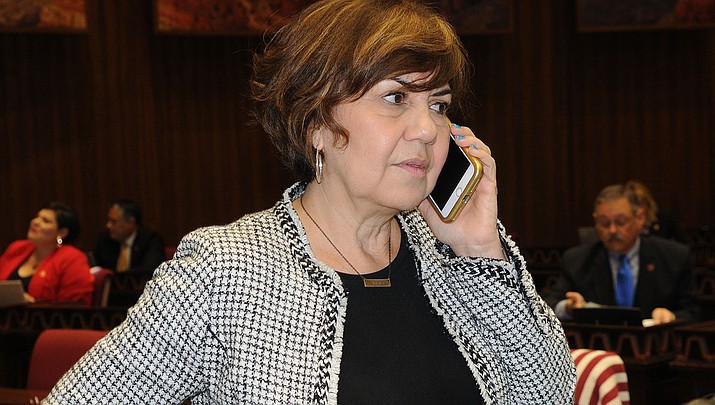 PHOENIX - Efforts to enact a no-growth budget to keep the state running in the face of COVID-19 hit a wall late Thursday.

Both the House and Senate earlier Thursday adopted spending plans designed to provide all state agencies this coming fiscal year with the amount of money they have now, with adjustments for inflation and population growth. The goal was to send lawmakers home for several weeks to both protect them from viral infections by being in group meetings and wait to see what the impact of the pandemic will be on the state budget.

Only thing is, the Senate budget contains $50 million in spending that is not in the House plan. And House Speaker Rusty Bowers, R-Mesa, said those extra dollars are not acceptable to his Republican members.

With a stalemate, lawmakers went home until Monday.

The sticking point is the Senate version has provisions added by Democrats they say are designed to take care of immediate effects of the virus on Arizonans.

Most notably, that includes establishing a Crisis Contingency and Safety Net Fund to be administered by the governor for economic assistance during an emergency. That includes housing assistance, such as payments to prevent eviction or foreclosure, funds for services for the homeless, cash for food bank operations, and economic assistance to health care providers, nonprofit organizations and businesses with fewer than 50 employees.

More to the point, it puts $50 million of tax dollars into the account and allows the governor to seek funds from other public or private sources.

Another bill eliminates the two year lifetime limit on Temporary Assistance to Needy Families as well as a requirement for adults getting these benefits to seek work.

And the Arizona Health Care Cost Containment System, the state's Medicaid program, can increase what it pays to those who provide services to the elderly and disabled to ensure that they can meet the demand during the emergency.

All that was not acceptable to House Republicans. In fact, they even rejected a proposal by Rep. Arlando Teller, D-Chile, for $40 million simply aimed at preventing evictions.

House Minority Leader Charlene Fernandez, D-Yuma, said the GOP majority is getting things backwards, insisting on adopting a "baseline" budget now and putting off until later questions about what finances the state should put into helping to blunt the impact of the outbreak on Arizonans.

"This is a crisis,'' Fernandez said. "This is what we should be dealing with first.''

That wasn't the only issue dividing members of the two parties.

House Democrats also objected to the fact that a bill to continue state aid to education restores only half of the $128 million that is owed to schools in "district additional assistance.''

Lawmakers eliminated the more than $300 million that schools had been getting for needs ranging from books and computers to buses. Some of the dollars were restored in prior years; Ducey in January promised to make schools whole this coming fiscal year.

Democrats argued that schools, shorted for years, need the money now. And they argued there is enough in current revenues to give them the cash, even if there is a downturn in the economy.

There was more consensus on legislation to maintain state aid to public schools if they remain closed past March 30 as long as they continue providing education to students.

The measure envisions online learning where available. But low-tech options are available, including using school buses to deliver lessons to students in rural areas.

Teller said that's not really a solution in rural areas, including on reservations.

"The bus routes are only as good as the weather,'' he said, noting it is still snowing in some areas of the state.

Rep. John Allen, R-Scottsdale, conceded the solution is not perfect. But he said the problem, created by the viral pandemic and the order of Gov. Doug Ducey and Kathy Hoffman, the state schools chief, to shutter schools through at least March 28, provides no easy answers.

"It is a Band-Aid,'' he said. "It is something to tide us over this emergency that we're in, this pandemic threat that we're facing.''

Less clear is when lawmakers will return to the Capitol after finishing the baseline budget.

Gov. Doug Ducey had proposed a $12.3 billion spending plan and a $44 million tax cut for retired military based on revenue projections available in January.

Since that time the COVID-19 outbreak has sent the stock market into a tailspin, cut into travel and tourism and, even before edicts to close bars and restaurants, reduced entertainment expenses.

For accurate, up-to-date information about the coronavirus, visit the federal Centers for Disease Control at CDC.gov, the Arizona Department of Health Services at AZDHS.gov, or the Mohave County Department of Public Health at https://bit.ly/2x95T8a.