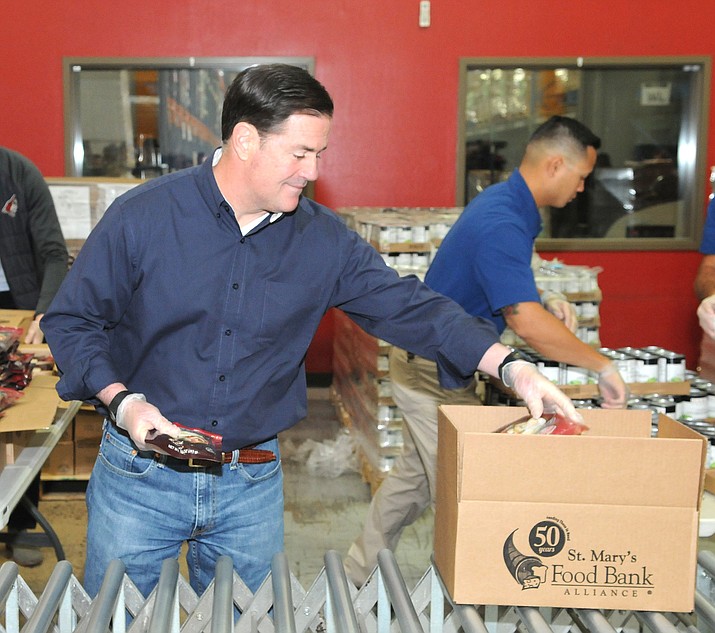 Gov. Doug Ducey said he sees no reason to go beyond his directive issued late Thursday to shutter bars, gyms and movie theaters in counties where there have been confirmed cases of COVID-19 and to allow only take-out and delivery services by restaurants. That currently covers 11 of the state's 15 counties. (Photo by Howard Fischer/For the Miner)

PHOENIX – Gov. Doug Ducey insisted Friday, March 20, he has no intent to order Arizonans to stay at home as his counterparts in New York and California have done.

In his latest briefing, the governor said he sees no reason to go beyond his directive issued late Thursday to shutter bars, gyms and movie theaters in counties where there have been confirmed cases of COVID-19 and to allow only take-out and delivery services by restaurants. That currently covers 11 of the state's 15 counties.

And Ducey said Friday he has no intention to either expand the restrictions statewide or to add other kinds of businesses where there is close personal contact to the list of businesses that have to close their doors like spas and hair salons, even as the number of confirmed infections reached 68.

The state late Friday also recorded its first death, that of a male in his 50s living in Maricopa County with what state officials said were "underlying health conditions."

The governor said broader restrictions are not necessary.

"I have no desire to shutter something that would not protect public health," Ducey said.

The governor acknowledged that the restrictions he has ordered have changed, sometimes over the course of less than 24 hours. But Ducey said there's a good reason for that.

"Each escalation, declaration and executive order that I have put out has been with the guidance of Dr. Cara Christ (the state health director) and the Centers for Disease Control and Prevention.

But even without any stay-at-home directive, both the governor and his health director say that's still their advice, albeit one without enforcement.

"Stay home, especially if you or a loved one have an underlying medical condition or are elderly," Christ said. "If someone in your household has COVID-19 everyone in the household should stay home until you are recovered."

And the health director said Arizonans should pretty much forget about actually getting testing to determine if they have the novel coronavirus.

"We continue to face a national shortage of test collection supplies and lab reagents," Christ said. "There are not enough tests at this time for everyone who wants to be tested."

Friday's briefing also provided the first indications of what role the National Guard, called out by Ducey late Thursday, will play in restocking stores. The governor said the bare shelves have nothing really to do with an insufficient supply but is instead a direct effect of hoarding.

"There is not a shortage of toilet paper or hand sanitizer or bottled water," he said.

And the fact is, Ducey said, there's no way grocers can keep their shelved stocked at the rate items are being snapped up. That goes to what he said will be the role of the troops.

"We can do big-scale logistics," said Maj. Gen. Michael McGuire, the adjutant general of the Arizona National Guard. He said that particularly mean moving large quantities of food "that final mile" between warehouses and grocery stores.

Ducey said that's where the bottleneck is.

"It typically takes two trucks to restock a grocery store," he said. "Today, in this environment, it's taking 12 trucks."

That's where the soldiers fit it, driving trucks and unloading pallets of goods.

McGuire said there may be situations where soldiers are actually helping not just unload pallets of items but actually are ensuring that items get onto shelves.

"But I can tell you with only 8,000 of us we can't stock every store in the state," he said. More to the point, the general said that's not what he has in mind for his soldiers.

"I hope that we are a bridging strategy to have those types of duties filled by community members that are not feeling ill that want to support their community, either go to work for these food companies or come in as volunteers," McGuire said. He said the better use of soldiers would be for those things for which his troops have been trained.

Consider, he said, a situation where a commercial truck driver calls in sick.

"We have a commercial truck driver that can fill in that gap," the general said.

"That's better use for me than to have folks unpack pallets," McGuire continued. "But we'll do whatever we need to do to first bridge this gap."

The general said the initial call up is only about 200.

He could not provide an estimate of how many soldiers eventually would be involved in the operation.

"Over the weekend, we're going to be adding to that," he said. But McGuire made it clear that there are Guard troops doing other jobs in the private sector that are better off where they are.

"If I pull in doctors, nurses, medics that are already working in our local hospitals, it's a zero-sum game," he said.

Groceries aside, one issue is medical supplies, particularly ventilators that may be needed for hospitals to treat people with respiratory problems.

Christ said the state has anywhere from 1,500 to 1,800 beds in intensive-care units. She said her agency is trying to find out where there are ventilators, not only as hospitals but out-patient surgical facilities and training centers.

"And we are putting in an additional request for federal ventilators," Christ said.

The governor said Arizonans need to recognize that the situation created by the outbreak is not going to go away any time soon.

"We don't have any illusions about this fight," he said.

"We are in this for the long haul," Ducey said. "I think it's important that people begin to think of this as a marathon and not a sprint."