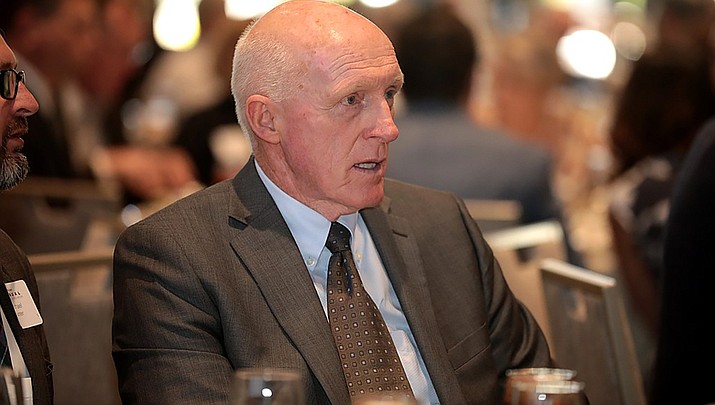 The Arizona House of Representatives has approved an an emergency budget that includes $50 million to help combat the coronavirus. Arizona House Speaker Rusty Bowers is shown. (Photo by Gage Skidmore, cc-by-sa-2.0, https://bit.ly/2wwoECJ)

PHOENIX - The Arizona House on Monday passed an emergency budget package that includes $50 million in funding previously approved by the state Senate to address the coronavirus crisis.

Republican House leaders had balked last week at approving the Senate budget but that changed over the weekend. House Democrats pledged to back the proposal but then spent nearly two hours Monday trying to add on additional spending, including measures to help workers who find themselves out of a job because of shutdowns triggered by the health crisis.

They eventually agreed to join Republicans and send the package to Gov. Doug Ducey for his expected signature. Both chambers adjourned for at least three weeks after the bill was passed.

The rare bipartisan Senate package includes money to prevent evictions and foreclosures during the crisis, provide services for the homeless, assist small businesses and pay for food bank operations. It also includes longer welfare payments and a waiver from work requirements. It added to a basic budget package the Legislature rushed through to ensure government keeps running amid the virus crisis.

It comes as the state Health Services Department reported 235 cases in Arizona, up from 152 a day earlier. There have been two deaths. Cases are expected to spike in the coming days and weeks. Gov. Doug Ducey has ordered schools, bars, restaurants and movie theaters closed and called up the National Guard for what could be a protracted virus fight.

The approval came after House Speaker Rusty Bowers had accused Democrats of going back on their agreement to quickly pass the emergency Senate package.

"The fact of the matter is that we had an agreement," Bowers said. “I spoke with the minority leader — she said they would be glad to follow and pass out the bills that came from the Senate. I took her at her word. Maybe this is as good as that word gets - I hope not.”

“I'm a little surprised at the speaker talking about me going back on my word," she said, noting that most Democrats had been ready to vote on the Senate-passed bill Thursday but Bowers had told her his GOP caucus were balking.

She said her agreement with Bowers didn't include a pledge not to amend the bills.

“At this point the Democratic caucus is pulling every one of their amendments, we are ready to vote on this bill, we are ready to get money to the people in Arizona that need this money,” Fernandez said.

Minority Democrats had hoped for more spending, including changes to an emergency unemployment bill that was also passed by the Senate.

Democratic Rep. Reginald Bolding said his members were trying to get paid sick leave for employees of small businesses. He also disputed Peterson's claim that any changes could delay emergency funding for days.

She also praised senators for last week's work on a bipartisan budget deal, something that hasn't happened in at least a decade.

"We did it, we did it nicely," Fann told her colleagues. "I couldn't be more proud of our Senate."

Gov. Doug Ducey issued an executive order Friday implementing many of the provisions in the unemployment bill. The order waives requirements for a one-week waiting period before benefits kick in and allows virus-quarantined workers or those caring for ill family to get benefits. The order also waives work search rules, allows workers to get benefits if their job site temporarily closes from work and keeps employer insurance rates from rising.

For most people, the new coronavirus causes only mild or moderate symptoms, such as fever and cough. For some, especially older adults and people with existing health problems, it can cause more severe illness, including pneumonia. The vast majority of people recover from the new virus.