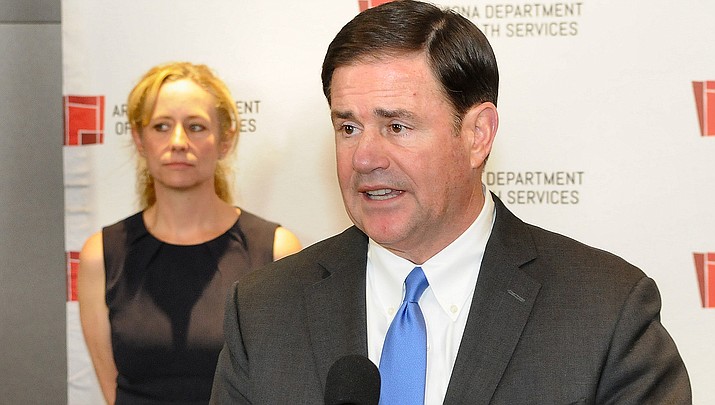 Arizona Gov. Doug Ducey announced a list of “essential services” which could continue operating in the state if a “ shelter in place” order would be required to stop the spread of the coronavirus. State Health Director Cara Christ looks on during a news conference on Monday, March 23. (Photo by Howard Fischer/For the Miner)

PHOENIX - Gov. Doug Ducey is preparing a list of what are "essential services'' should he decide to order everyone who doesn't fit into that category to stay home due to COVID-19. (See the list at the bottom of this story.)

The governor said Monday that he would not follow the lead of counterparts in other states who have implemented "shelter in place'' directives "at this time.'' He said the health experts with whom he has talked don't believe that's necessary.

"I'm working with guidance from CDC and the Department of Health Services,'' Ducey said. "That's been guiding Arizona's direction.''

But the governor acknowledged that, in preparing this list, he is setting the stage for who will be governed by such an order should he believe that becomes necessary here.

"We are watching what's happening around the country,'' Ducey said, describing it as a "proactive and administrative step.''

More to the point, the governor said it will let individuals and their employers know what to expect.

"It's so that people in these situations can plan ahead,'' the governor continued. "We're going to hope for the best but we're going to prepare for eventual escalation of this.''

The governor, in preparing for what might come next, said the situation will get worse before it gets better, mentioning the two deaths in Arizona so far.

"It's a sobering indication of what we will likely continue to face,'' he said.

State Health Director Cara Christ said her agency also is preparing for what happens next.

One particular issue, she said, is the state currently has 16,905 licensed hospital beds and 1,532 intensive care beds.

"The estimated need is rapidly evolving as we gather new data, with a potential surge of COVID-19 patients above and beyond our current capacity of beds,'' Christ said.

Some of that, she said, could be taken care of by having hospitals use triage tents outside of emergency rooms and converting recovery rooms and other unused portions of buildings. Christ also said the state is looking at reopening closed facilities and converting ambulatory care centers -- essentially out-patient facilities -- into hospitals.

There's even a proposal to use the Arizona Coliseum "to provide step-down or recovery care to those who are ready to leave the hospital but unable to go home.''

And Christ said she is working with federal agencies to secure three field hospitals, two for Phoenix and one for Tucson.

Ducey also said that he has no plans ready to unveil on what he intends to do about the economic havoc that COVID-19 has placed on individuals and companies.

"We care about the people that are affected and living paycheck to paycheck,'' the governor said at a briefing on the latest news about the spread of the virus. And Ducey said he applauds the Legislature for approving a baseline budget for the coming year, including providing him $50 million to use at his discretion for economic relief.

He said there is a 14-page "economic protection plan'' being worked out, promising details in "the very near future.'' But he said that's not where his attention is right now.

"The priority and focus first and foremost has been public health,'' Ducey said.

That leaves the question, though, of a link between economic relief and public health, particularly amid the risk that people could become homeless, putting them in a situation where they might be more at risk of contracting the virus.

Ducey noted that the $11.8 billion contingency spending plan for the coming year just approved by the Legislature provides $50 million for the governor to use at his discretion for economic relief. (See related story)

"It's our intention that we will be stretching and strengthening the safety net of the state,'' he said, adding he is "hopeful'' that Congress enacts a plan.

But some of the economic issues remain firmly within the control of the states.

That includes the fact that Arizona limits weekly jobless benefits to $240 a week, a figure that has not been altered since 2004. Only Mississippi has a lower cap.

Ducey provided no answer to the question of what plans he has to seek to increase that, saying only he wants to focus on "the most vulnerable.''

That issue of jobless benefits dovetails into the question of whether some people who have not yet been laid off or are incapable of going to work because they are contagious might still end up being forced to say at home, without pay, if they are not determined to be "essential.'' As to when that might happen, Ducey said, "Not at this time.''

"Arizona isn't there yet,'' the governor continued. "We're not at the same stage as other states.''

And Ducey said that, in a call he was on with other governors, Vice President Mike Pence "made it clear that there have been no discussions about a nationwide lockdown by the president's Corona Virus Task Force.''

Anyway, Ducey questioned whether such an order is necessary in Arizona.

"As I travel around the state it's obvious that citizens around the state already are staying at home and acting responsibly,'' he said. "There's empty streets and empty sidewalks and traffic-free highways.''

Still, the governor said that his order of what services are "essential'' will provide "clarity and consistency.''

These are what Gov. Doug Ducey has identified as "essential services" should he issue an order for everyone else to stay at home: