Mohave County freezes new construction and hires due to coronavirus 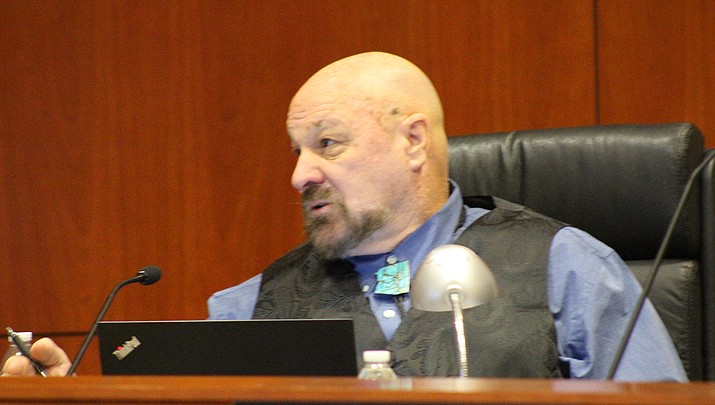 The Mohave County Board of Supervisors, following a recommendation from Supervisor Buster Johnson, shown above, is temporarily freezing new building projects and hires due to the possible financial impact to the county budget by the coronavirus pandemic. (Miner file photo)

KINGMAN – New construction projects and new hires are temporarily on hold for Mohave County government due to budgetary concerns related to the coronavirus.

Per District 3 Supervisor Buster Johnson’s suggestion, all building projects that Mohave County has planned but not yet contracted will be put on hold for 30 days, with the exception of the Bullhead City County Attorney’s Office project and paving projects. The same will apply to non-essential county hires, the Board of Supervisors decided at a special session on Thursday, March 26.

“We don’t know what our finances are going to be,” said Johnson, who originally suggested the freeze last for 60 days, but modified the motion at District 2 Supervisor Hildy Angius’ request. “The cost of materials is changing daily and contractors can’t guarantee prices.”

This decision is not impacting awarded projects that are already on the way like the courthouse project in Kingman, County Manager Mike Hendrix explained.

The construction of a new animal shelter looks bleak. Last year, the county allocated $2 million for the shelter. The design-build team that was previously selected provided a technical proposal that was rejected by the county, Hendrix said.

“So with this project, we are at the point of starting all over,” he added. Eventually, the board agreed to move forward by doing preliminary work that must be done before construction through a procurement process rather than bidding.

pursue the animal shelter project for now via procurement, where a lot of work needs to be done before the actual construction.

Latoski mentioned that three parking space improvement projects in the capital improvement fund are expected to be carried out.

Johnson said he doesn’t have a problem moving forward with projects such as parking lots and roads if materials can be secured. Supervisor Gary Watson of District 1 agreed and noted prices of asphalt are dropping dramatically.

The county should take advantage of the falling prices in the construction market and move forward with all planned projects, Gould recommended.

“I think we are looking at this incorrectly,” he argued. “We should keep people working. By this shutdown we are doing more damage to the economy than we are seeing from the actual virus.”

The only problem with this approach is that the prices can’t be guaranteed anymore, observed Johnson, who was otherwise sympathetic to Gould’s proposed strategy.

The board consulted county Finance Director Coral Loyd regarding the future of the county budget. She said an economic downturn is likely, but the county already received most of its property tax revenues for the year. The county’s budget relies for about 30% on state-shared funds and the long-term future of those are uncertain.

Loyd also observed that, according to a new study by the Brookings Institute, 18% of Mohave County residents work in tourism and can be affected by the current crisis.

“I don’t have a definitive, crystal-ball answer,” she said when asked about the county’s economic future.

The county put a freeze on all new county hires unless they are considered essential, in which case they must be brought before the board for approval.

“We need to start watching our money and see where the economy is going,” said Johnson, who introduced this item.

Both county hires and new construction projects will be reassessed again in 30 days, even though Johnson said he expects the county to be in the middle of a bigger problem in 30 days, he said.