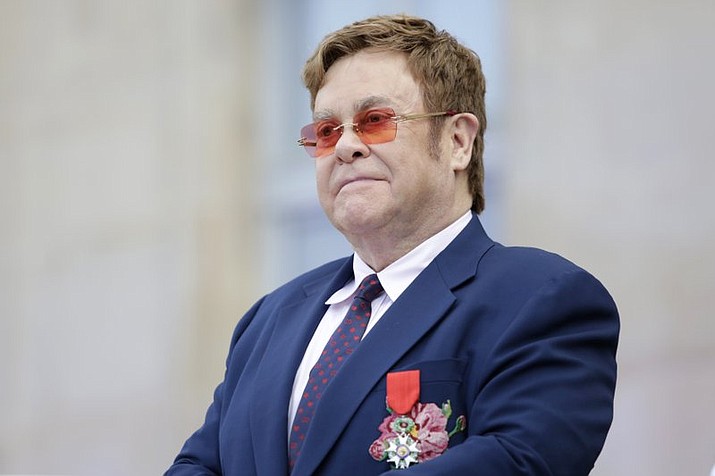 This June 21, 2019 file photo shows Elton John at a ceremony honoring him with the Legion of Honor in Paris. John is hosting a “living room” concert aimed at bolstering American spirits during the coronavirus crisis and saluting those countering it. The event was announced Wednesday by iHeartMedia and Fox. Alicia Keys, Billie Eilish, Mariah Carey, the Backstreet Boys, Tim McGraw and Billie Joe Armstrong are scheduled to take part in the concert airing at 9-10 p.m. Eastern Sunday on Fox TV and on iHeartMedia radio stations. (AP Photo/Lewis Joly, Pool)

LOS ANGELES — Elton John is hosting a “living room” concert aimed at bolstering American spirits during the coronavirus crisis and saluting those countering it, iHeartMedia and Fox said Wednesday.

The artists will be filmed with cell phones, cameras and audio equipment in their homes “to ensure the health and safety of all involved,” according to a statement. The event will take the time slot that was to belong to the iHeartRadio Music Awards, which became part of a wave of public-event postponements and cancellations because of the pandemic.

Besides performances, the commercial-free concert will honor health professionals, first responders and others who are “putting their lives in harm’s way to help their neighbors and fight the spread of the virus,” the media companies said.

Viewers will be asked to support two of the charitable organizations aiding victims and first responders during the pandemic: Feeding America and First Responders Children’s Foundation.