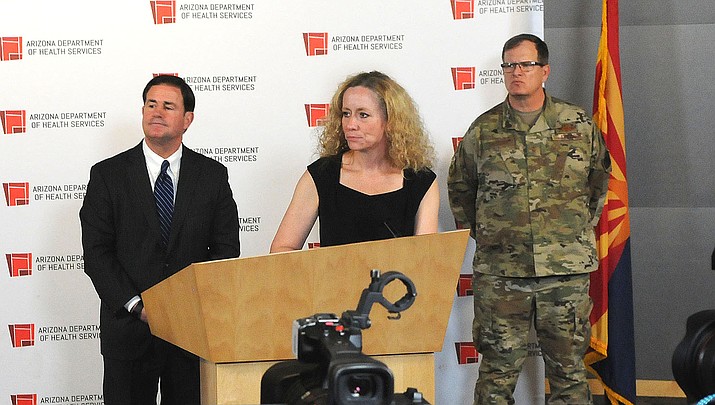 Arizona Gov. Doug Ducey, left, watches as state Health Director Cara Christ talks to the media last week. Ducey’s extensive list of “essential” businesses that can’t be closed have tied the hands of some local governments that are hoping to enact more restrictive provisions in light of the coronavirus pandemic. (Photo by Howard Fischer/For the Miner)

PHOENIX – The mayor of Tucson is ordering the closure of all non-essential businesses – but only those that Gov. Doug Ducey said local governments can shutter.

In a formal proclamation late Friday, Regina Romero said she believes that some of the businesses that Ducey defined as "essential” are truly "not in fact critical or essential during this pandemic emergency.” These include hair and nail salons, barber shops and other "personal hygiene services.”

And she said that they conflict with the recommendations on "social distancing.”

But Romero, rather than challenge the governor, instead only "strongly advises” that they close.

The mayor also issued a similar advisory for “Tucsonans to stay home except as may be needed to address essential needs,” like getting food and prescriptions, fresh air and going to work if employed in an essential function.

All the orders take effect at 8 a.m. Saturday and continue through at least April 17.

Romero has been especially critical of the governor and his failure to issue any sort of "stay at home” orders, suggesting that more is necessary to prevent the spread of COVID-19. But she said Friday that she has to "respect the governor's executive order.”

"I don't want to make it into a political stance,” the mayor said. And Romero made it clear she does not want any possible legal challenge that could lose state revenue sharing.

"Right now is not the right time to get into a legal fight with the governor or the Legislature,” she said.

City Attorney Mike Rankin acknowledged that the mayor's order does not spell out what functions are non-essential.

"We're not in a position to sit here and come up with a list of everything that is is essential and non-essential,” he said. In fact, Rankin said, any business owner who is unclear should call the governor's office as it was Ducey who came up with the list.

But there is a potential risk for guessing wrong: Rankin said that businesses that remain open that the city determines are not essential face potential misdemeanor citations. Romero said, though, that police would first try to educate business owners.

Pressed for what might not be essential under the proclamation, Rankin named shoe stores, tattoo parlors and hookah lounges.

Romero's order stops short of actions taken a day earlier by her Flagstaff counterpart who has decided to shutter hair salons, beauty parlors and "similar businesses” due to the threat of COVID-19, setting the stage for a possible showdown with Ducey over his own directive.

In a proclamation Thursday, Coral Evans acknowledged the governor's executive order listing what services he believes are "essential” and therefore not subject to closure. That list includes "personal hygiene services.”

"The CDC has been very clear that the COVID-19 is expanding at rates that we don't necessarily understand,” she said. That, Evans said, is backed up by the latest figures that show a 35% increase in confirmed cases in Arizona just overnight.

And Evans said when she did her first proclamation closing down bars and in-restaurant dining earlier this month – before Ducey took the same action later – there were no cases of the virus in her county.

The New York Times reports there are similar orders in 24 states, with 74 counties and 14 cities having their own declarations. The paper reports that these are not any form of martial law, allowing people to leave their homes for necessities, to go to the doctor or simply get some fresh air.

At the same time, state Sen. Vince Leach (R-Tucson), is threatening to file a complaint with Attorney General Mark Brnovich accusing Flagstaff of disobeying state law. And if Brnovich were to side with Leach, the mayor would have to rescind the order or face possible loss of state aid.

And Leach said if other cities follow suit, he will file similar complaints against them.

Evans said she recognizes that there are people who believe she is reacting in a way beyond what is necessary.

"But I would like to say that I would rather be considered too conservative in protecting my city than too liberal with the lives of the people that live in it,” she said.

And there's something else.

Evans said she's not defying the governor. She simply concluded that the kinds of places she is ordering shut do not fit within his definition of "personal hygiene services.”

"He didn't define nail salons, beauty salons and and beauty parlors as personal hygiene services,” Evans said. She also said her city's attorneys concluded they did not fit within that definition under state laws.

What remains to be seen is what the governor – or state lawmakers – will do.

But Ptak has not responded to repeated requests by Capitol Media Services to cite specific statutory authority for the governor to tell cities what businesses they cannot close during a public health emergency.

And Ducey himself earlier this week specifically defended the scope of his order of what is off-limits to local control or closure.

"I want to make certain that our state is speaking with one voice, that there's clarity out there and not confusion,” the governor said. The alternative, he said, is "a patchwork of directives,” with different rules in cities that may abut one another.

"We want to make sure citizens understand what the guidance is, what's safe, what's required of them and what's most important,” the governor said.

Ducey also brushed aside questions, many raised by mayors who had written to him, about why he considers golf courses, playgrounds and personal-care facilities like spas and massage parlors to be "essential” – and beyond their ability to close.

"Our directives have been in guidance with the CDC, the NIH (National Institutes of Health) and the Arizona Department of Health Services,” he said.

Leach defended his threat to file a complaint against any city that he believes is ignoring the governor's orders.

"We're in the middle of an unprecedented crisis,” Leach said. "This action is not helpful and it is illegal.”

Leach told Capitol Media Services he reads state law to give the governor broad powers during a time of emergency. And that, he said, includes overriding contrary actions of cities and counties which, under the Arizona Constitution, are political subdivisions of the state.

That, Leach said, makes sense to have a unified plan.

"To have 91 cities and towns, 15 counties and every other taxing district that is a political subdivision of the state going all their different ways is not the way, in my humble opinion, that you address things,” he said.

He said this is no different than pre-emption that exists on other issues, like precluding cities from imposing their own taxes on cigarettes or even determining their own drinking ages.

That still leaves the question of whether Evans' order actually defies the governor.

Even Leach acknowledged that the wording of what are "personal hygiene services” is not precise. But he said there's a good reason for that – and for not listing exactly what businesses are and are not covered.

"As soon as you make a list you're in trouble,” he said, because that means something could be left out that really should be part of the category.