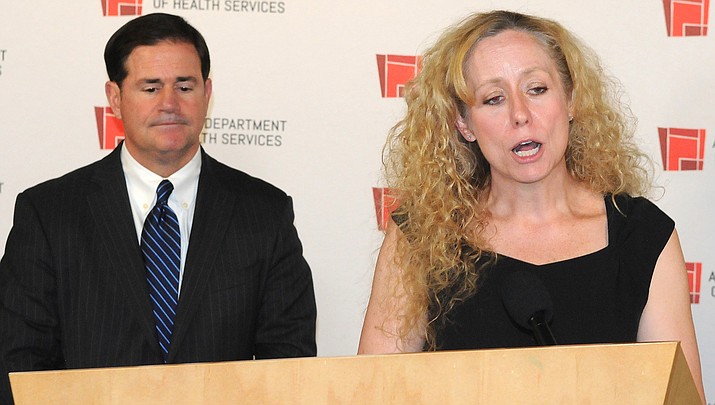 Arizona Gov. Doug Ducey has issued a stay-at-home order for Arizona residents on Monday, March 30, in an attempt to slow the spread of the coronavirus. He acted at the urging of state health chief Dr. Cara Christ. (Photo by Howard Fischer/For the Miner)

PHOENIX - Arizona Doug Ducey on Monday imposed a stay-at-home order to slow the spread of the new coronavirus that will take effect at the close of business on Tuesday.

The governor said he took the action after the state's top health official said it was necessary to slow the spread of the COVID-19 disease caused by the virus.

Dr. Cara Christ, who oversees the Department of Health Services, said the rate of cases being seen in emergency rooms has been steadily rising, and the percentage of positive tests had increased from 2% of samples to about 7%, a rise that triggered her recommendation for people to stay at home.

The governor said the order takes effect at 5 p.m. Tuesday for all activity that is not essential, and he said people should still enjoy the outdoors.

“We do not want people to feel trapped or isolated in their homes,” he said. “The weather is beautiful right now. Find a way to get out and enjoy it — with physical distancing.”

Earlier Monday, the mayors of nine cities — including Phoenix and Tucson — sent a letter to Ducey imploring him to issue the stay-at-home order.

Ducey had for weeks resisted making such a call. He prohibited mayors from forcing the closure of businesses on a lengthy list of enterprises deemed essential, from hospitals and grocery stores to golf courses and parks. That order remains in effect.

Arizona had lagged most other states in imposing restrictions. Nearly 230 million people live in states where governors have issued statewide shelter-in-place orders or asked people to stay at home. In other states — including Texas, Florida and Pennsylvania — governors have resisted state-level proclamations or recommendations, but mayors and localities have acted.

State health officials said there are more than 1,150 coronavirus cases and 20 deaths in Arizona. Greenlee County, Arizona's smallest, reported its first case, making it subject to Ducey's orders for bars and gyms to close and restaurants to offer only takeout service in counties with cases of COVID-19, the disease caused by the coronavirus. The restrictions now apply statewide with cases reported in all 15 counties.

The stay-at-home order came hours after Ducey and the state's top school official said shuttered schools would remain closed for the rest of the school year.

The extended school closure, announced by Ducey and state schools chief Kathy Hoffman, means students will have to use online or alternative learning methods to close out the year. The closure affects 1.1 million K-12 charter and traditional school students. Private schools could re-open April 30.

Before Monday's extension, Arizona schools had been set to reopen on April 13.

Ducey said he intentionally issued a “stay-at-home” order rather than calling for a “shelter-in-place" order to reduce fear.

“They were crying this morning when they found out,” said Beth Lewis, a fifth-grade teacher in the Tempe Elementary School District who has transitioned her class to online instruction.

“Teachers, what we do is create community, and so I think that’s the biggest loss of all this,” said Lewis, who co-founded Save Our Schools Arizona, a grassroots teachers group that organized a strike over low teacher pay and funding in 2018. “It’s really hard to re-create online.”

Schools have been working to move teaching online or send packets home to students in low-income or rural areas who lack internet connections or computers. Under emergency legislation signed by Ducey, schools are freed from classroom instruction and other requirements but required to educate students in other ways.

Hoffman's spokesman, Richie Taylor, said some school districts are already offering online instruction while others are working to get homework packets to students.

“Some are able to easily transition to online models pretty quickly,” Taylor said, “Of course that’s going to be harder for other areas. So we’re encouraging the use of take-home packets, having bus drivers delivering homework to different areas, that sort of thing.”

Tucson Unified School District, for instance, told Hoffman's office only half its 43,000 students have internet access.

The Window Rock School District on the Navajo Nation began online instruction Monday for its 1,900 students after extending spring break. But the district’s acting superintendent said it might not be the only solution going forward.

For most people, the coronavirus causes mild or moderate symptoms, such as fever and cough that clear up in two to three weeks. For some, especially older adults and people with existing health problems, it can cause more severe illness, including pneumonia and death.