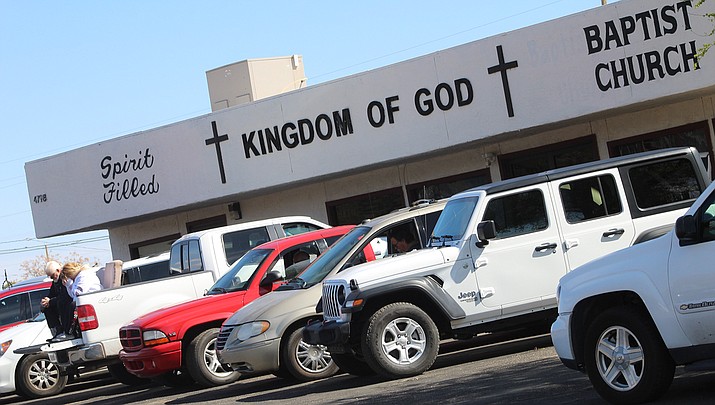 About 30 cars filled the parking lot of the Kingdom of God Baptist Church on Sunday, March 29 for a drive-in church service. Holding the service outside enables worshippers to observe social distancing recommendations during the coronavirus pandemic. (Photo by Casey Jones/Kingman Miner) 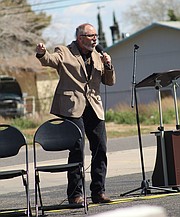 Pastor Bob Peet of the Kingdom of God Baptist Church delivers his sermon in the parking lot of the church on Sunday, March 29. (Photo by Casey Jones/Kingman Miner)

When some parishioners wanted to continue to hold indoor services, and others wanted to worship only online, Pastor Bob Peet of the Kingdom of God Baptist Church found a way to make everybody happy and still comply with social distancing recommendations – drive-in church.

About 30 cars, the vast majority holding multiple worshippers, packed the lot at the single-story church at 4798 Stockton Hill Road in Kingman on Sunday, March 29 in the midst of the coronavirus pandemic. Peet estimated attendance at 80 or more. 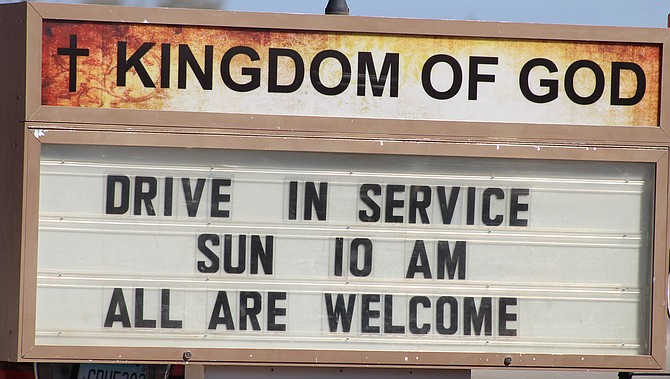 The Kingdom of God Baptist Church is holding drive-in services in the church parking lot each Sunday at 10 a.m. during the pandemic. (Photo by Casey Jones/Kingman Miner)

Nothing unusual about that. Attendance at the church is 80-120 combined over three services on any given weekend.

Only this time, the congregation congregated without leaving their cars, with few exceptions.

One couple sat in chairs in the back of their pickup truck. Several bikers straddled their rides front and center. When Peet asked everyone to greet the other parishioners, a cacophony of horns sounded instead of the usual chorus of well-wishes and handshakes.

“I have been going to church my entire life, and this was my first drive-in service,” said Sandy Gilbert, a member of the flock.

It was a little unusual for Peet, too. The pastor of seven years said he is used to preaching to people, not Pontiacs.

With reflections, not faces, visible in the windshields, “there was no visual connection” to feed off, he said.

“It was like (preaching to) Lightning McQueen,” Peet laughed, paying homage to the animated “Cars” star.

Yet the service went flawlessly, sans one stoppage in play when the public address system went down for a minute or two.

The music came first, with Peet on bass guitar, peeling through a playlist of Christian music backed by Bill Bailey on steel pedal guitar and Adam Hess on guitar. Deanna Trevino, LeeAnn Beaver and Peet’s wife Sandy provided the vocals.

Then came the praise reports, and the prayer requests, in nearly equal numbers.

“For everyone in the world with the virus,” said one attendee, calling out her request from a car in the lot.

While it was Peet’s aim to provide a sense of normalcy by keeping the service the same as always, accepting the offering was an exception.

Peet’s son, Spencer, made the rounds in the parking lot, collecting checks and cash in a gold bag marked “tithes and offerings” instead of an offering plate.

The sermon was punctuated with humor and focused on the virus. “It’s not going to last too long, because it’s made in China,” Peet predicted.

He cautioned against fear: “Love is what you’re born with; fear is what you learn.”

And he advised focusing on the positive things happening in the community and across the country, like seniors shopping first at grocery stores, and families ordering take-out to support locally owned restaurants. Corporations large and small gearing up to produce health-care supplies, and congregations gathering without congregating at drive-in church services.

Drive-in church is not unique. For example, famed television evangelist Robert Schuller got his start with a drive-in movie ministry in the 1950s in Orange County, California.

And now, with the coronavirus grinding services to a halt, drive-in church services are again gaining in popularity.

“I believe drive-in church is a superlative compromise between people who would be afraid to attend a regular service, and people who want regular services to continue,” said Gilbert, who authors the church newsletter. “It still offers a certain amount of camaraderie.”

Peet gave drive-in services a boost locally at a meeting of the Kingman Unified Pastoral Association last week, and said he thinks the concept will catch on quickly.

“A lot of churches are taking it up. I shared it with everybody at the pastors’ meeting,” Peet said. “We’re all on the same team; we all want the same thing.”