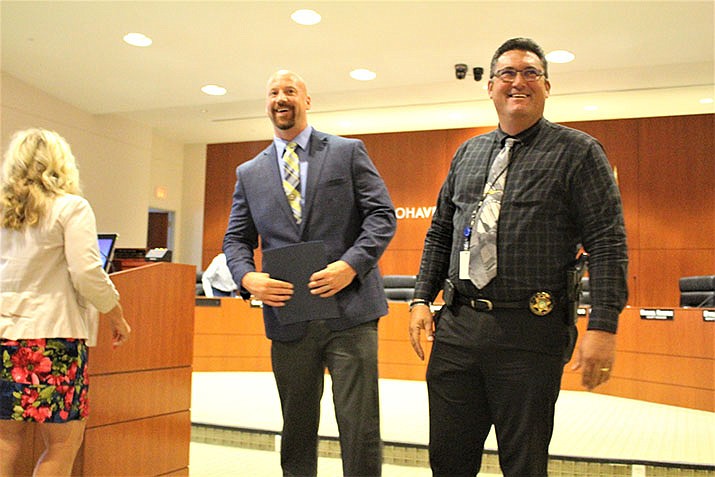 KINGMAN – Mohave County Sheriff Doug Schuster told the county board of supervisors Thursday, April 30 that he is disappointed with Gov. Doug Ducey’s decision to extend the stay-at-home order and keep in place several restrictions on non-essential businesses during the pandemic.

“I’m no doctor but what I do understand is the great economic strain this pandemic puts on our county,” Schuster said.

The sheriff said that the residents of Mohave County are “more than capable” of making good decisions.

“I’m not going to make criminals out of law-abiding citizens that are struggling to make ends meet and put food on the table,” Schuster said, adding the sheriff’s office “will not become the social distancing police.”

Schuster said the lockdown was intended as a temporary measure to slow the spread of COVID-19, and it did its job.

While he encourages people to continue social distancing, Schuster said his job is not only to ensure citizens’ safety, but also their constitutional freedoms.

“Are you saying, Sheriff Schuster, that you are not going to follow the governor’s order,” District 3 Supervisor Buster Johnson asked.

“I disagree with the governor’s order as it pertains to the criminal aspect,” Schuster replied. “I will not put people in jail for violation of that executive order.”

What about citing people, Johnson inquired, explaining “I’m worried about the millions of dollars that are at stake in our budget if the governor will withhold our state-shared revenues.”

“I’m simply saying that as a sheriff I cannot in good conscience issue a citation or arrest people for a violation of a social-distancing recommendation,” Schuster said. “Or businesses that elect to sell food, or people eating in a parking lot.”

He said his deputies are being called at such instances and decided to not take action. “I’m not going to go to a group of people and say: ‘There are 11 of you and I’m going to separate you.’ We will not take criminal actions about those things.”

“I would like to commend the sheriff,” chimed in District 5 Supervisor Ron Gould. “Sheriff is the law.”

Gould said the governor has his own police, namely the Department of Public Safety, and he uses them if he wishes so.

Supervisor Hildy Angius of District 2 thanked Schuster for “siding on the side of the Constitution and liberty.”

“I want to assure the citizens of Mohave County that I will protect their freedoms at all cost,” Schuster repeated, adding he is not the only sheriff in the state that is planning on doing so.

Asked by Chairwoman Jean Bishop for an opinion, Deputy County Attorney Ryan Esplin said he doesn’t think anyone is asking the sheriff’s office to become the social distancing police.

At the same time, he advised against not following the governor’s order, adding that there might be isolated instances when the county will have to act.

“This is an executive order,” he said. “And yes, there might be an instance when you have to arrest somebody. Or you might have to cite somebody.”

“We cannot have people picking and choosing which law they want to abide by,” Johnson said. “If we have a bad order, it’s our responsibility as a board to change this order, not to try to go against it.”

“Take comfort as a board in knowing that in every situation within my jurisdiction where an incident occurs, I’m going to deal with it personally,” Schuster responded. “I’m going to make those decisions. It’s not on you, it’s on me. … I have to live with myself.”

“To be logical, we have a Republican governor and a Republican House and three very high-level Republican representatives at the state,” Angius said, noting it is unlikely there would be repercussions if the county would not follow an executive order. “I seriously doubt they would make it happen,” she said.

All the board members recognized that action is needed to remind the governor that, as Bishop said, Mohave County “is quite different than the metropolitan area,” and should be treated differently.

Schuster praised the board’s plan to write a letter to the governor asking for modifications to the order as it applies to Mohave County.