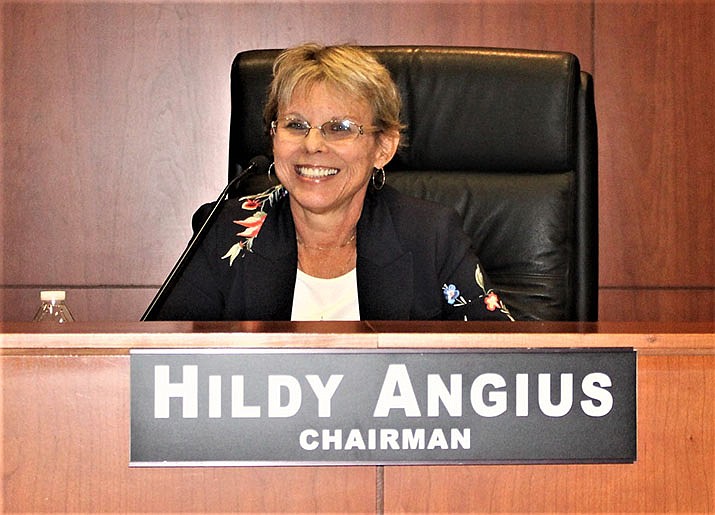 The most vocal voice on the issue was District 2 Supervisor Hildy Angius, who said she will not be “begging” the governor and refused to sign the letter. (Miner file photo)

KINGMAN – The idea of writing a letter to Arizona Gov. Doug Ducey calling for autonomy to open Mohave County and lead Arizona by example fell through at the Mohave County Board of Supervisors’ meeting on Monday, May 4. The most vocal voice on the issue was District 2 Supervisor Hildy Angius, who said she will not be “begging” the governor and refused to sign the letter.

“I don’t think you need me or this board to give you permission to open,” she said, addressing local business owners directly. “If I had a business, I would be open.”

Angius said a draft of a letter submitted for the supervisors to sign was a “watered-down version” of the letter that she, along with the county’s state government delegation – Rep. Regina Cobb (R-Kingman), Rep. Leo Biasiucci (R-Lake Havasu City) and Sen. Sonny Borrelli (R-Lake Havasu City) – submitted to the board at the previous meeting. But, as Chairwoman Jean Bishop pointed out, the state delegation wasn’t happy with the wording of the letter, either.

“At that time we were aware of the threat to take away money from state-shared revenue and FEMA money,” Angius said. “Later, I was told that if this elected board will defy the governor’s order, it might put people’s unemployment benefits in jeopardy.

“By the way, even just reading this last sentence makes me want to cry,” Angius continued. “Never thought in my life I’d be threatened by our own state government, but here we are.”

Angius said sending the letter at this point is meaningless since the businesses are already opening. The governor knows how rural counties feel about the lockdown, Angius said, because the county’s state representatives “did a very good job in letting him know.”

She added the county has a statement of Sheriff Doug Schuster who said he will not be prosecuting people for trying to make ends meet. She also referred to an opinion of Arizona Attorney General Mark Brnovich, who defined attending church services as essential and protected by the Constitution.

“If you are a church, you can hold services without a fear of punishment,” Angius said. Even though keeping a distance of 6 feet during the service is recommended, many essential activities violate this rule, she added.

“The governor was wise in the fact that he didn’t order to close the churches and gun shops,” said District 5 Supervisor Ron Gould, who stated it is not the county staff’s place to write a letter on behalf of all five supervisors, who have “distinct feelings,” Gould said. “Because if he had done that, that would be entangling with our rights that are embedded in our Constitution.”

Angius said the increasing number of confirmed coronavirus cases in the county is the result of additional testing.

“We are seeing more cases because we are testing more,” Angius said. “One-third of our cases came from one assisted living facility.”

Angius said she is looking forward to the next conference with the governor, saying he is being pressured by a lot of representatives to let local governments have autonomy and make decisions on their own.