Lake Mead National Recreation Area is back in business 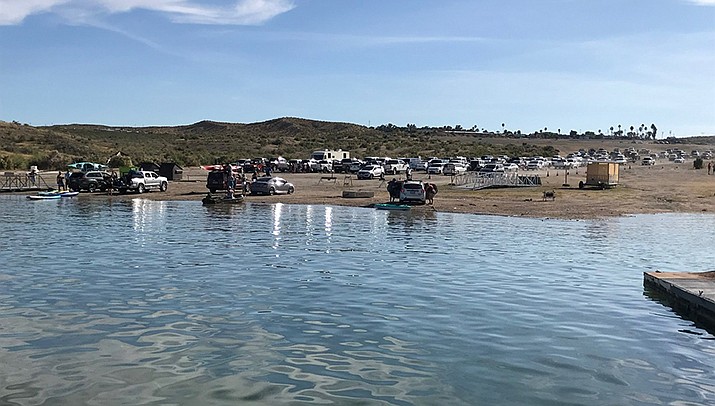 A crowd gathers at Temple Bar Marina on the Arizona side of Lake Mead on a sunny weekend day in late April. (Courtesy photo)

KINGMAN – Recreation-hungry residents, many from out of state, have been descending on the Arizona access areas at Lake Mead, causing overcrowding as well as potential environmental problems because the restrooms on the Arizona side were closed.

Now, those problems have been remedied with the decision by Nevada Gov. Steve Sisolak to allow recreation areas to reopen on the Nevada side of the Lake Mead National Recreation Area, and the decision by LMNRA officials to reopen the public restrooms in the park.

Restrooms are and have been available to the public in the Mohave County-owned Hualapai Mountain Park and Davis Camp along the Colorado River at Bullhead City. The situation looked different for weeks in the national recreation area, which includes Lake Mead and Lake Mohave.

On April 15, Nevada Gov. Steve Sisolak closed all National Park Service properties in the state, including the Nevada side of Lake Mead, leaving the Arizona side open and attractive to nature-hungry out-of-staters.

Preston is a local resident of over 25 years, she said. She has been sheltering in place with her husband on their houseboat to maintain a safe distance from others as recommended during the coronavirus pandemic. Temple Bar Marina has chosen to limit the services they provide, closing the restaurant, campground and hotels. But the park remained open.

“What we witnessed was baffling,” Preston said the weekend of April 17. “We counted over 300 vehicles in the parking lot. We were wondering where these people were going to use the restroom?”

She said park rangers were working and could have managed the restrooms as they usually do.

Christie Vanover, LMNRA public affairs officer, said the restrooms were closed “because we were not able to clean them as frequently as usually.”

“We have employees with health conditions who stay at home,” she said. “Others are teleworking.”

“We had to reopen them,” she said.

“The superintendent of LMNRA, Margaret Goodro, agreed to bring in staffing from other areas to help with the Arizona side being overrun,” she said.

But the problem went away last week with Sisolak’s decision.

Now, both sides of the recreation area, along with all of the restrooms, are open again, including at Willow Beach, Temple Bar and South Cove on Lake Mead, and Katherine Landing on Lake Mohave, on the Arizona side.

LMNRA wrote on its website that when recreating, the public should follow all local health orders, avoid overcrowding and “practice Leave no Trace principles, including pack-in and pack-out, to keep outdoor spaces safer and healthier.”

Water in Lake Mead is at safe level for recreational use
Searchers find body of missing California man at Lake Mohave
No South Cove launch ramp after 2020? NPS to be here on Dec. 10 to explain why
Bodies of missing Golden Valley residents found
<i>The Great Outdoors</i>
Event Calendar