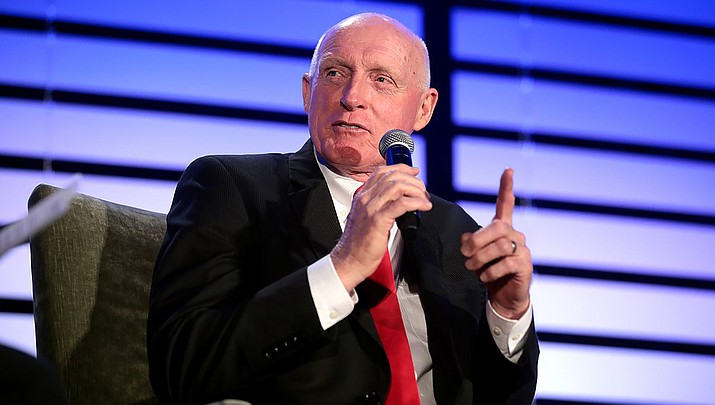 GLENDALE, Ariz. - The Speaker of the Arizona House pulled the plug late Thursday on the Senate's plan to meet Friday just to adjourn the session for the year, but the Senate is moving ahead anyway.

Republican Speaker Rusty Bowers announced late in the evening that the House would not convene as planned. That's a turnaround from a notice he sent his members at midday Thursday calling them back to the Capitol in Phoenix for a Friday session.

Bowers' first announcement came hours after GOP Senate President Karen Fann made a surprise announcement that senators would return from a six-week recess triggered by the coronavirus pandemic so they could adjourn.

Fann said the Senate will forge ahead with her plan to adjourn Friday, and she has said she has the votes. If the Senate votes to close the yearly session, the House will have no ability to act on legislation. But it is unclear if a formal adjournment can come without the other's consent.

Many House Republicans and some in the Senate were opposed to Fann's plan, saying they wanted to resume the session and complete work on hundreds of bills that had stalled.

Bowers had not said he was planning to also ask the House to call off the session. He made clear late Thursday that majority Republicans wanted the session to continue.

“We intend to remain in session and, together with the Senate and Governor, work in support of the safe and expeditious reopening of our society, our economy, and protection of our state’s small businesses and communities," Bowers said in a statement.

Fann's adjournment plan would have effectively killed legislation that had not been passed when lawmakers recessed on March 23 after enacting a bare-bones budget for the coming fiscal year.

It is the second time Bowers pulled the rug out from under Fann and her plans to adjourn for the year. Both leaders had announced on April 21 that they planned to return May 1 to adjourn the session. The following day, that plan was put on hold after some House Republicans revolted.

Pushback to Fann's new plan from some Republican lawmakers was swift.

GOP Rep. Kelly Townsend, who has been pushing hard for lawmakers to continue the session as normal, tweeted the dictionary definition of "nonfeasance,” or failure to act. Sen. David Livingston told The Associated Press that he would push to keep the session going, although he doubts he has enough Senate votes.

“There’s a fight going on between the House and the Senate on what bills to do or not to do,” Livingston said. “And since there’s not an agreement, it appears to me that leadership is just throwing their hands up and (adjourning). So I’m frustrated — there’s a whole bunch of us that are frustrated. But not enough to prevent it.”

That's because minority Democrats were certain to back adjourning, and it would only take a handful of Republicans in support to get the needed majority vote.

Fann said before Bowers' decision not to meet that it had become clear there was no way to advance significant legislation under virus protections.

"There’s a matter of safety here,” she said.

She did say she expected lawmakers to return in a special session that would only address virus fallout.

Livingston said he agrees that there is much work to do — especially on a proposal from fellow Republican Sen. Eddie Farnsworth to boost liability protections and negate the criminal penalties in Ducey's business closure orders.

Those orders are being eased, with many retail shops being allowed to open this week, hair salons and barbers on Friday and restaurants next Monday, with precautions.

Farnsworth’s proposal won’t get a chance to be introduced if the Senate adjourns.

“Tomorrow we can get haircuts. Monday we can go to restaurants,” Livingston said. “And what are we doing at the Legislature? We’re closing up."

"We’re doing the opposite of what we’ve been encouraging the state to do. We need to lead by example and be down there working if we expect Arizona to go back to work,” he said.