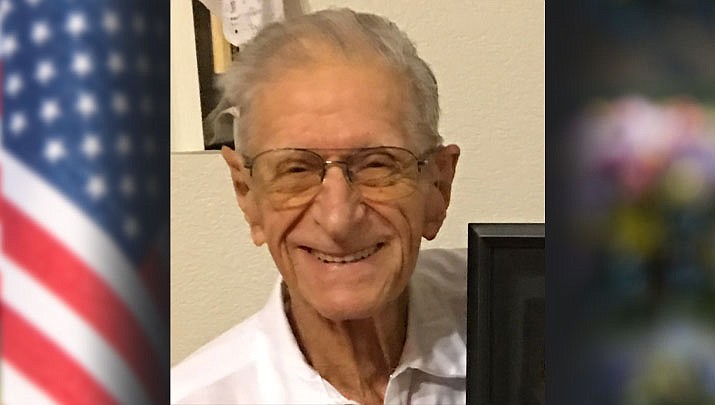 Elmer L. Graves was born in Kingman, Arizona on Sept. 17, 1925 and passed on 10 May 2020 at the age of 94. His mother, Jane (Janie) Grigg Graves, was also born in Mohave County, making Elmer a second-generation resident. Of interest, the Grigg and Graves families have resided in Mohave County since the 1890’s. His maternal grandparents, William and Bessie Grigg, immigrated from Cornwall, UK, before settling in Mohave County. For a number of years they operated the Grigg’s Ferry for crossing the Colorado River. The family home, sometimes referred to as Grigg’s Hideout, was eventually covered by the back water from the Hoover Dam. Elmer’s father’s family arrived in Arizona from Lewiston, Missouri in the early 1900’s. His father, William Bryan Graves, met Janie Grigg at Hackberry, Arizona, and they were married shortly after he returned from World War I. Elmer and his two brothers, William and Harold, attended Kingman grammar and high school. His father was a building contractor who built many structures around northern Arizona, to include the school gymnasium at Ashfork, Arizona. Unfortunately, William died relatively young leaving Janie to raise their three sons.

Elmer served in the Navy as a combat air crewman from 1943–1946. Elmer’s aviation unit was assigned to the North-South Coast of the Atlantic, performing anti-submarine (ASW) patrol, and to utility squadrons transporting war supplies along the Brazilian coast. As a lifelong aviation enthusiast, Elmer received his aircraft pilot license and was a founding member of the Kingman Civil Air Patrol performing search and rescue missions in Mohave County in the 1950s.

After his active duty service in the Navy ended, he came back to Kingman where he was president of the 20-30 Club, which was a service organization for young men in Kingman. As a life-time member (75 years) of the American Legion, he also served as District Commander for the American Legion in 1950. He initially worked in the Studebaker and White Motor Company dealership as a mechanic and ultimately the service manager. In the ‘50s, he branched out and opened his own service station on Route 66 located on the corner of 5th and Andy Devine, where he has conducted business continuously for over 70 years. Of local interest, Elmer established Kingman’s first U-Haul Rental Agency, which is one of the oldest franchises within U-Haul.

He was a long-time pillar of the community having served as American Legion Post 14 commander and as president/member of the Mohave County Union School Board. Additionally, he was a member of the ELKS, Eagles and VFW organizations. Elmer was a prominent member of the Kingman Downtown Merchant’s and the Route 66 associations. He also donated his time to the Salvation Army serving as the collection and dissemination point for the yearly bell-ringers collections and for the distribution of donated turkeys.

He is survived by four of his five children (William Bryan of Colorado Springs, Colorado, Kitty Jo Cirulli of Buffalo, New York, Craig Lane of Mesa., Arizona, and Katie Marie Kubes from Indianapolis, Indiana) from his first wife (Helen Carrara Graves), five grandchildren and three great-grandchildren. His other son, Dale Austin, passed away in 1964. Elmer and his second wife (Charlene) led an active life and managed the Smoke House Bar for many years. In his retirement years Elmer remained engaged with his various businesses and keeping up with his favorite sports teams, the local ELKS and American Legion.

Due to the pandemic and the geographic distribution of his family, his internment and “A Celebration of Life” will be announced later. In lieu of flowers, donations in memory of his name can be made to either the Kingman American Legion Post 14 or the Mohave Museum of History and Arts.