State: Jobless checks are in the mail 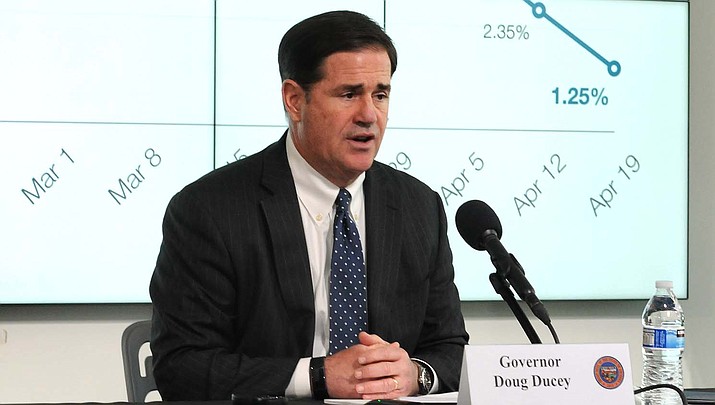 Arizona Gov. Doug Ducey speaks at a recent news conference about COVID-19. The state is still struggling to send out some unemployment checks to workers who lost their jobs due to the pandemic. (Photo by Howard Fischer/For the Miner)

PHOENIX – The checks are finally going out to Arizonans who are ineligible for the state's regular unemployment insurance program.

Officials from the Department of Economic Security said Monday they were mailing 165,000 checks out to individuals who filed for benefits through May 2. These checks will be for at least $2,151 – $171 base state payment plus $600 under the Pandemic Unemployment Assistance program – which represents three weeks' worth of benefits.

The total being paid out to those 165,000 Arizonans amounts to $350 million. And, eventually, those who are eligible will get checks going back as far as Feb. 2.

Then on Tuesday, DES will be taking new and updated applications for the PUA program online.

But other problems remain.

In a Twitter message Monday afternoon, the agency said it was aware that there are some who filed their weekly certifications of eligibility for the state's regular unemployment benefits recently who are not getting the payment.

"We sincerely apologize and are working to correct this as quickly as possible,” the message says. "We will provide an update as soon as we have an estimated date of payment for these claims.”

The developments come as the agency reported Monday that another nearly 33,000 Arizonans – close to 1% of the total workforce – had applied for first-time jobless benefits last week.

That brings to more than 545,000 the number who said they have lost work since the middle of March due to any combination of the COVID-19 pandemic, the stay-at-home order issued by Gov. Doug Ducey and the governor's separate orders shuttering certain kinds of businesses, resulting in furloughs and layoffs.

It also represents more than 15% of the total state civilian labor force.

Whether that becomes the figure in the actual monthly unemployment report depends on several variables.

The most significant is that the official report is based on a survey of households where residents are asked whether they are working and, if not, whether they are actually looking for work. That would include people who want jobs but had not applied for unemployment benefits, whether due to eligibility or simply the inability to complete their applications.

And the next report, due to be released May 21, covers only a snapshot of the situation in Arizona during the second full week in April. The official May jobless figures won't be announced until June 18.

The filings also come as Ducey has eased up on some of his orders.

This past Friday he allowed barber shops and hair salons to reopen if they follow certain health protocols.

More significant, as of Monday the governor agreed to permit dine-in services at restaurants and bars, some of which had remained open on a limited basis for take-out and pick-up services. That should result in rehiring of some employees, though the safety restrictions, effectively including some seating limits, may still leave some facilities short of previous staffing levels.

It will take weeks, if not longer, to see how that affects the state's jobless rate.

The Pandemic Unemployment Assistance program was created by Congress as part of the Conronavirus Aid, Relief and Economic Security Act to help those who are otherwise ineligible for standard state benefits. Generally speaking, that includes the self employed, independent contractors and those in the "gig economy,” like drivers for rideshare programs.

Benefits are available for up to 39 weeks.

It also has had a rocky start in Arizona.

While people have been eligible for the PUA payments now for months, the state has been slow in actually setting up a process for applications. Michael Wisehart, the agency's deputy director of employment and relief services, said the system set up to handle regular unemployment claims would not work for those in the PUA program.

So the state had to hire an outside firm to set up a separate system. And that went online only this week.

Under normal circumstances, those seeking benefits would have to actively be seeking work to remain eligible. But agency spokesman Brett Bezio said that has been suspended for both regular and PUA benefits under the terms of an executive order by Gov. Doug Ducey.

Bezio said, however, that to get the PUA benefits applicants have to self-certify that they are otherwise able to work and available but for the fact they are unemployed, partially unemployed, or are unable or unavailable for work because of the COVID-19 outbreak.