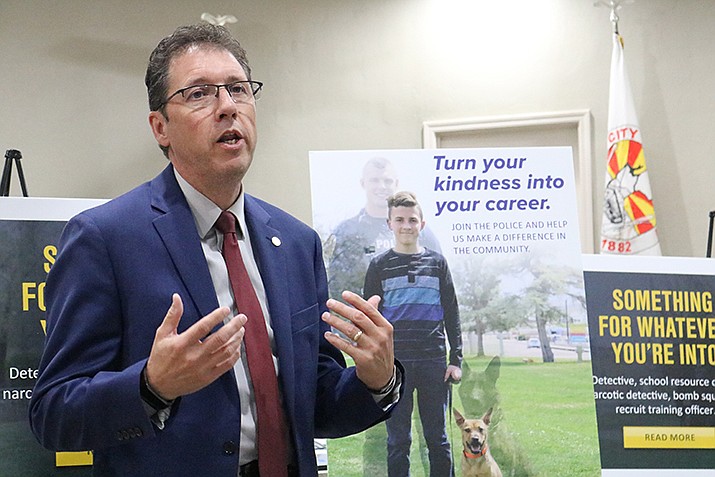 Kingman City Manager Ron Foggin said during a recent budget work session that the city will avoid dipping into its cash reserves despite a loss of revenue stemming from the coronavirus pandemic. (Miner file photo)

KINGMAN – The City of Kingman’s preliminary budget will seemingly avoid dipping into cash reserves now that general fund operating expenditures are down 12.6%, but as noted by City Manager Ron Foggin and Vice Mayor Travis Lingenfelter, the drop in expenditures still comes with a cost.

Foggin explained to Kingman City Council during its recently held budget work session that general fund expenditures have decreased due to proactive steps taken by the city. Those include leaving vacant two groundskeeper positions, and taking advantage of a vehicle replacement program which entails replacements being leased over a five-year term as opposed to being purchased outright. A $1.55 million Public Safety Personnel Retirement System payment has been deferred to the end of the year, as well.

“In our budget that we’re presenting, we are not using any rainy day fund money to really plug any holes,” Foggin said. “That, I think, is really, really important. Obviously, it’s been a rainy day, and it certainly would’ve been easy to justify the use of it, but maybe more rain will come later.”

Departments have also been asked to reduce supplies, training, equipment, and repairs and maintenance. However, Foggin said such reductions aren’t sustainable over a long period of time. He noted that departments could be hurt “pretty badly” in the event an unexpected expense arises.

The vice mayor agreed that the reductions are not sustainable and only temporary. “You’re absolutely right; it does come at a cost,” Lingenfelter said to Foggin. “When you start to get rid of training, when you start to defer repairs and maintenance, what you’re really doing if you do it long term is you’re becoming a structurally weaker organization. So it does come at a cost, and I hope the people understand that it’s temporary.”