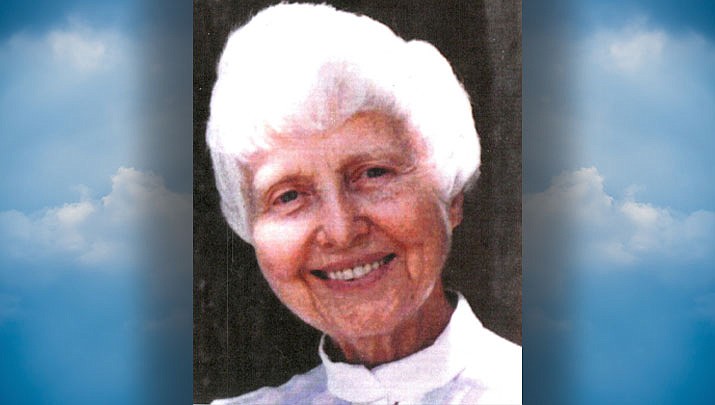 Sister Madonna Marie, Black O.P., aka Marian Black, the third child of Mabel and Arthur Black of Kingman, Arizona, was born March 15, 1926 and passed away peacefully on Feb. 15, 2020. As Marian Black, she directed St. Mary’s choir from age 15 and garnered vocal talent for the choir from among high school teachers and from the Air Force men who lived and worked at the Kingman Air Force site where, for several years, WWII airplanes were dismantled.

After high school, she moved east to attend Georgian Court College. Because her parents, Mr. and Mrs. Arthur Black, had to travel to Michigan to pick up two new buses for his transportation business and had agreed to bring back many nuns to drop off at various locations where Catholic schools needed staffing, such as New Mexico, Arizona and California, it was then that the young Marian took note. Mr. Black was a major contributor to making St. Mary’s a Catholic School and bringing the first nuns to Kingman. Marian was so inspired by the nuns that she decided in July 1945 to join them, thus taking on her new name, Sister Madonna Marie, Black O.P. (Order of Preachers).

Her teaching career began in earnest in 1947. Being proficient in music, art and managerial skills, she was sent to many places such as San Francisco, Detroit, Michigan, St. Petersburg, Florida, Albuquerque, New Mexico, and Phoenix and Mesa, Arizona, culminating at Kingman in 1980 where she was to care for her mother, Mabel VanMarter Black, who passed at 93 in 1987. During this time, Madonna Marie was very active in the pastoral ministry, in peace groups and music and art, and lent a hand to the Mohave Museum of History and Art along with supplying artifacts to the Power House Museum.

Being the historian that she was, it was through her efforts that the Arthur and Mabel Black home was placed on the national registry of historic homes. Her final years, from 2013-20, were peacefully spent at the same mother house where it all began some 75 years ago. Sister Madonna Marie passed after 75 years of service as a nun, with her sister, Helen, by her side.

Forty-two days later, after Madonna Marie’s passing, our sister, Frances Black Madole, AKA Sister Rose Madonna, nun for nine years passed, also, on March 29, 2020. They lived together in the family home together for 10 years.