Arizona paid out over $500M in jobless benefits last week 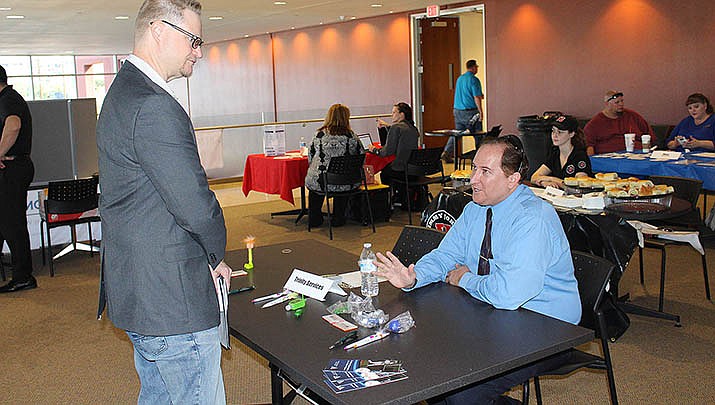 A job fair is shown in Kingman in 2019 during happier times for workers. According to the Associated Press, Arizona paid out over $500 million in jobless benefits last week as the economy remains stalled due to the coronavirus pandemic. (Miner file photo)

PHOENIX - Arizona paid $519 million in jobless benefit payments last week as the Department of Economic Security caught up with weeks of overdue benefits for thousands of applicants who are unemployed because of the coronavirus pandemic.

The department began reviewing applications and making payments to self-employed people, contractors, workers with insufficient earnings history and others who don’t normally qualify for assistance.

They got it through a Congress-approved program called Pandemic Unemployment Assistance, The Arizona Republic reported.

The more than half a billion dollars paid to 468,000 people surpassed the prior week of $160 million in payments, department officials said.

Of the recipients, more than 165,000 people were given pandemic assistance and the remaining 303,000 people received regular unemployment payments.

Before the pandemic, the state paid about $3 million a week in jobless benefits and had about 4,000 new applications.

The department announced Monday that the state received another 109,000 initial applications last week, some of which could be duplicates from people who were originally denied.

“The demand for this assistance is significant, and by continuing to distribute benefits to our communities, we can support families in need, as well as our state’s economic recovery,” Betlach said.

Half of the additional deaths were determined by reviews of death certificates, the state Department of Health Services said. There have now been 14,897 cases and 747 deaths.

For most people, the coronavirus causes mild or moderate symptoms, such as fever and cough that clear up in two to three weeks.

For some, especially older adults and people with existing health problems, it can cause more severe illness, including pneumonia and death. The vast majority of people recover.

Carmona joined university President Robert Robbins at a news conference Wednesday in Tucson. Both men said the school is aiming to reopen this fall in a hybrid fashion of both in-person and online instruction.

Robbins said he could not see a vaccine being developed, manufactured and distributed in less than a year.

In addition, there are several faculty members who are in the older at-risk age group – some with underlying health conditions.

The school also wants to reopen dorms but with multiple changes.

These will likely include masks being available, enforcement of proper social distancing and no more than two students assigned to a single room.